Now hear the word of the Lord

On 1 May 1911, Rowland Betty Orr (1852-1933), superintendent of the Ontario Provincial Museum, visited the site and proclaimed them to be the 300-or-more-year-old remains of "Indians". The assertion was pure invention. Regardless, an expert opinion had been rendered and the myth of an Indian burial ground on the east side of the Humber river took root. It may have been promulgated at the Ontario Historical Society where Orr was to become president. More recently, the idea has been promoted by the Weston Historical Society, for example, by Barb Shiells in 2009 here, and by Chris Menary in 2018 here: 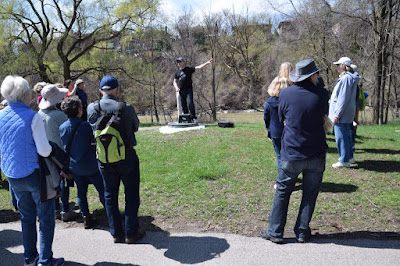 The 1937 "History of Weston" (Cruikshank & Nason) noted the existence of an Ojibway burial place just south of Farr's Mills (on the west side of the Humber) still being used as late as 1825. One would think that they would have mentioned the Weston bones site, which wasn't just close to Weston but actually within the town's border. They didn't!

The Bellevue Crescent bones site was never properly investigated. As such it is one of unknown date and culture. Victor Konrad catalogued it in 1973, along with a supposed Scarlett Road "settlement" that he erroneously placed near the Weston bones location. Given the absence of credible scientific information and the presence of incompetent archaeological opinion, writers such as Glenn Turner (The Toronto Carrying Place, 2015) have simply repeated the empty echo-chamber reverberations of the native "ossuary" myth. The latest to do so (seemingly with a vengeance) is Edward Brown, a freelance Toronto writer who published an interesting article on the Weston bones in the Toronto Star last Saturday. In light of the well-researched background to the article, one may wonder why Brown failed to disclose the true nature of the Weston bones. I shall explain.

Brown's incredibly competent research uncovered the existence of a cranium bone fragment that had apparently become part of a 1911 Westminster Presbyterian Sunday School cornerstone time capsule, recovered in 1956. In 2011 the Weston Historical Society ceded the capsule's contents to an archaeologist in the hopes of a Huron-Wendat reburial. Brown's discovery that this reburial had not yet taken place presented him with all that he needed to compose his newspaper article. June is National Indigenous History month and June 21 is National Indigenous Peoples day. In light of the recent finding of 215 children's remains in unmarked graves at a former British Columbia "residential" school, the article pretty much writes itself! Brown's only job now is to sell the reader on the idea that the bone fragment is Aboriginal. For an accomplished writer like Brown that should be a piece of cake.

"... what became of the disinterred remains, and has their memory been honoured? Answers proved hard to come by and disappointing."

We are ready for the con:

" ... the [Sunday school] site they chose to build on was sacred ground. ... [in spring 1911] ... Hart had disturbed a Huron-Wendat ossuary dating from the late Iroquoian era. At peace for roughly half a millennium, bodies of 30 individuals buried 60 centimetres deep were exposed."

Calling the site sacred ground is presumptuous. To Indigenous people "sacred" means something different than it does in Anglo-Christian culture. At any rate, we don't know that the burial was Huron-Wendat, nor that the bones had been there for 500 years. We do know that it was only 14 individuals buried 45 cm deep. This is Brown's first use of the word "ossuary" and (in his mind) more individuals and a deeper burial will bolster that implant. Brown's 30 individuals and 60 cm comes from the 28 April 1911 Toronto Daily Star article. My 14 individuals and 45 cm comes from 29 April 1911 Globe article. In light of the rampant speculation ("that there are probably scores of skeletons still uncovered", in the Globe), there is little doubt that the Star had already turned that fantasy into a reader-inviting headline. The Star's "two feet" from the surface became the Globe's "eighteen inches". Any numbers aficionado (of which I am one) will tell you that the latter is not only more accurate, but still within the former's error bars. The inflation of Orr's 300+ years to ~500 years is an important subterfuge because the 300 years is still within the framework of the French presence in Ontario. At any rate, I've already stated that Rowland Orr's opinion amounts to nothing. The bones could have been 50 years underground or 5000. I am not arguing that the bones aren't Aboriginal. I am simply saying that we do not know that they are.

"Upon his visit, Orr helped himself to a pair of skulls for study and preservation at the Ontario Provincial Museum."

So clever! Here's how the Globe's 2 May 1911 article stated it: "Dr. Orr secured two skulls to take measurements of their various dimensions and also to preserve as curios." The 29 April 1911 Globe article had already suggested that "an examination of the skulls themselves reveals unmistakable aboriginal anatomical features". That's a somewhat remarkable off-the-cuff observation for a reporter to make! Brown replaces the "measurements" with "study", fearing no doubt that the former might lead to an examination of craniometry in anthropology in those days. And of course Brown mustn't mention the preservation "as curios" because that would give away Orr's game of collecting relics not for the museum, but for his personal stash. With a deft replacement of words, Brown manages to shield Orr from any hint of either racism or impropriety. The man is just a scientist doing his job. I don't really understand why Ed Brown felt that he needed to do this. Orr was a product of his culture at the time.

Brown indicates that he tried to track down Orr's "samples" but was unsuccessful. In fact, Orr may already have lost his skulls in 1917 when his 1914 "Laidlaw Room" was dismantled and the collections stored away at the direction of the provincial government. A final observation: In Brown's version, Orr "helped himself" to the two skulls. In the newspaper report, he "secured" them. It is never explicitly stated but, is there any doubt that these are the two "splendid skulls ... rescued from the depredations of the innocent pillagers by Mrs. Frank Munshaw"? How ironic! Rescued from innocent pillagers only to have them taken from her by a not-so-innocent pillager. And even more ironic: Brown's word replacement stratagem (for once) got it right! Orr helped himself.

"Author Glenn Turner ... speculates, 'The ossuary on Weston Road may have been a local village cemetery or a communal Feast of the Dead pit.'"

The second mention of "ossuary". As previously noted, there was no native settlement on the east side of the Humber in Weston. Turner's "Feast of the Dead pit" is "a deep pit lined with beaver robes". That it definitely was not.

"Kapches recalled a visitor showing up ... 'There was a (portion of a) cranium, I assume from (the) ossuary in the cornerstone box.' ... From 30 skeletal remains, only a bone fragment the size of a large scallop shell can be accounted for today."

The third mention of "ossuary". Another mention of 30 individuals. Are we there yet?

"Ward 5 [councillor] Frances Nunziata ... was unaware an Indigenous ossuary had been disturbed in 1911. ... In consultation with Indigenous partners in the community, Nunziata committed to start the process of assigning a commemorative plaque for the site. Over a century later, a process is in motion granting the bones of Weston reverence long ago denied."

The fourth mention of "ossuary". I think we are there! When Nunziata finally unveils that plaque, I'm betting that it will include the word "ossuary". Maybe even the number 30. And perhaps Edward Brown will be at the unveiling. If he is, he can pat himself on the back and say: "Well done, lad. Well done!"

In my previous posting, I set up a dictionary of American English integer names (by letter count) and illustrated the concept with alphabetically-sorted sections for each of the letter-counts from 3 to 13. Now I intend to do the same for letter-counts from 14 to 40, but first a couple of caveats. Starting with 10^306, there is not a lot of agreement on what the 10^3n power names should be, so I will limit my naming to integers less than that. Also, I have little confidence that the program I wrote to generate the lists captures every integer name in that range. At some juncture the number of terms may simply be a lower bound. For my 14- to 40-letter names that bound is followed by a link to the sorted integer-name text file. For 33- to 40-letter files, they are compressed, which means they will likely download to your computer after clicking on the link, ready for you to decompress and open in a text editor (one that — hopefully — is capable of handling these gargantuan files).

Posted by Hans Havermann at 3:33 AM No comments:

A dictionary of American English integer names (by letter count)

From 3 letters to 13 letters, but leaving out the (numerical) definitions:

By American English we mean to exclude the conjunctive use of "and". As befits a dictionary, the integers are sorted alphabetically in each letter-count grouping. In such ordering, a word separator (a space or a hyphen) precedes any letter of a longer expression that starts the same. For example, "eight undecillion" precedes "eighteen thousand". The 13-letter entries introduce the comma, which functions to separate differing 10^3n power regimes. The counts (4, 4, 6, 6, 3, 13, 22, 35, 32, 36, 89) differ from A121064 only in the 89 for the 13-letter count. That is because our larger number range allows for "centillion" (of which there are 4) to finally show up. As we go beyond 13 letters, we expect such intrusions to increase.

Posted by Hans Havermann at 1:35 PM No comments:

Click on the image for a much better look! A bird's-eye view of Jane St. (left to right near the bottom) and Denison Rd. E. (from the prominent zebra-stripe pedestrian crossings at Jane St. to Weston Rd., just past the curved underpass at the railway corridor). The green arrow points to the empty-field location of a now almost-ready FreshCo grocery outlet that is about a ten-minute walk from my home (the yellow arrow at the top). By the way, this is the exact location of what was once The Moffat Stove Company.

I only learned about the new grocery on Monday, so I took Bodie there for a look:

They are hiring next week so I expect the store opening in a month or two.
Posted by Hans Havermann at 12:13 PM 2 comments:

Nine months ago, I showcased my then-largest Leyland prime find. Things have changed a bit. Here are, as of today, the top ten known Leyland primes:

The first column gives the number of decimal digits. The Leyland number of an (x,y) pair is x^y + y^x. Half of the entries have been found in the last seven days!

Posted by Hans Havermann at 11:33 AM No comments:

Much ado about UFOs (UAP)

I'm increasingly annoyed by the lack of skepticism in the current round of media hype about UFOs (UAP). Randall Munroe (xkcd) and Michael Shermer explain what should be obvious:

Posted by Hans Havermann at 5:02 PM No comments:

This is a screen grab of Google maps' depiction of a twisting section of Kelly Rapids that appears to be the de facto border hereabouts between the Canadian province of Quebec and the American state of Maine. Very noticeable is the straight-line segmented border approximation of the waterway, as though it was created on a much lower-resolution map. Also noticeable is a small section of the stream that appears to have taken a different, more-northerly route, thus inadvertently ceding some Canadian land to the Americans!
Posted by Hans Havermann at 12:20 PM No comments: