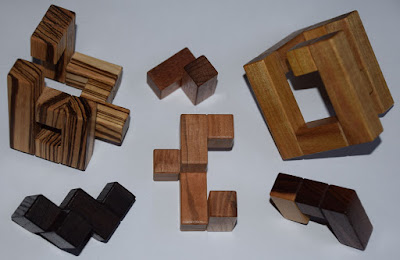 Spin is my first acquaintance with a Jos Bergmans creation, realized here in exotic woods by Brian Menold. Bergmans' polycube constructions are for me a natural progression from my old standby, Stewart Coffin's Convolution, and its subsequent improvement, Involute. Spin is a pleasure to take apart and put back together. 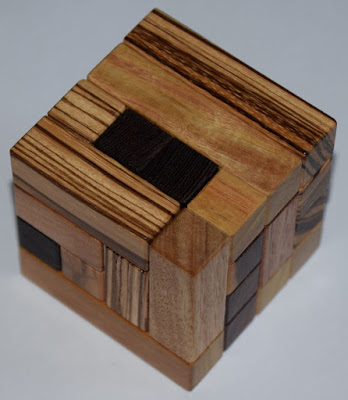 Posted by Hans Havermann at 3:33 PM No comments: 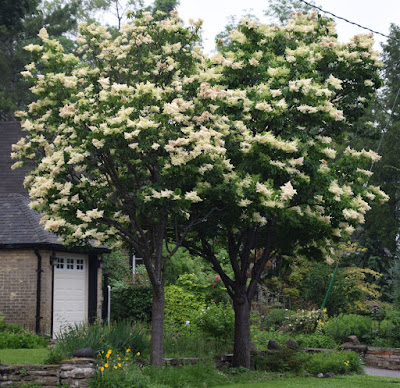 At this time of the year, my walks to and from the park are distracted by these two mature Japanese tree lilacs — Syringa reticulata — in bloom. The pervasive fragrance of the showy flowers is to me quite pleasant, an opinion not apparently shared by everyone. One person described it as vaguely fishy but — as another commenter there pointed out — it is musky, not muskie.
Posted by Hans Havermann at 11:30 AM No comments: 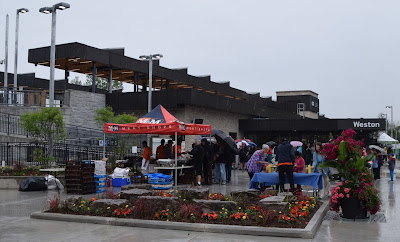 Today was Metrolinx's appreciation day for the Bloor and Weston communities putting up with the rail service construction's inconveniences. In spite of a steady rain, the event seemed well attended. I picked up my free round-trip ticket and went up to the downtown platform where I watched a full up train come and leave without me. I then proceeded to the airport platform for what turned out to be more of the same. One might have expected a small ramp up of services (considering the freebie) but I guess appreciation only goes so far. Standing in a crowded passenger vehicle for an hour is not my idea of a worthwhile venture. I left the platform, availed myself of a free hot dog, and sauntered home. 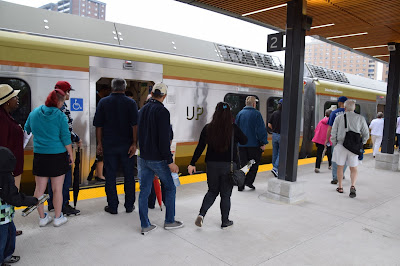 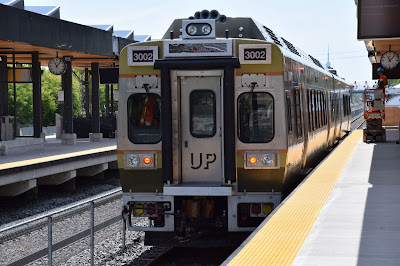 A couple more pictures of the new Union Pearson Express train. Above, a train in Weston Station — headed downtown (the top of the CN tower is visible above the front of the train). The station is far from ready. I had to dodge workers to get to the platform — and the new footbridge across Lawrence Avenue West was still closed! Below, a train has left the station going to the airport — about to enter the tunnel that allows Weston's King and Church streets not to be interrupted by the UP service. John Street was a third major Weston thoroughfare (roughly where the train is in the photo). It being too close to the Lawrence rail overpass, the railroad section of John had to be sacrificed to the tunnel approach's downslope. In lieu of the road, residents have been promised a footbridge. 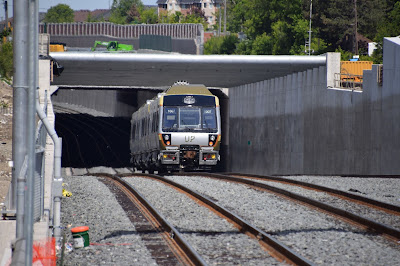 Posted by Hans Havermann at 1:30 PM No comments:

The Union Pearson Express trains started their passengers-accepted runs this morning. My first photo shows a three-parter shortly after it had left Weston station (one of only two stops: a 7-minute walk from my home) on its 25-minute ride from the airport to downtown Toronto. The outrageously high fares are mitigated somewhat if one buys a transit debit card for one's payments. My second photo, a few minutes later, shows a two-parter from Toronto about to arrive into Weston station: 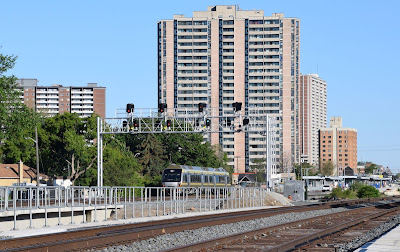 Posted by Hans Havermann at 9:00 AM No comments: