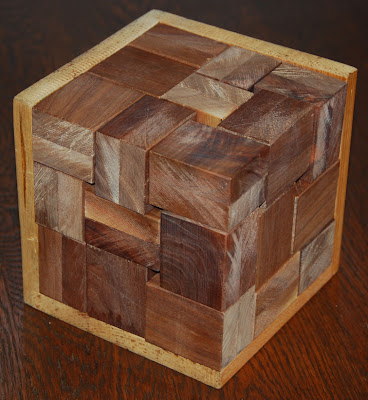 This is a photo of my Bill Cutler version of Hoffman's packing puzzle which I have had socked away in a cabinet for the better part of thirty-five years. The blocks are 15x18x22 deci-inches and the frame, 55 cubed. Bill's pieces (each one composed of a 7.5x18x22 doublet) sport some rough saw-cut ends and sides. The frame was originally a box, but one of its sides warped and I decided that it would look better with that and another one of its sides removed. Fine woodworking versions have been created by Trevor Wood and John Devost. Gemani Games and Puzzles sells a version in Samanea.

Dean Hoffman thought up the packing problem in 1978 (Bill Cutler thinks it was 1976: see #8 here) and wrote about it in David Klarner's The Mathematical Gardner (1981, pages 212-225). Elwyn Berlekamp, John Conway, and Richard Guy covered it in their Winning Ways (1982, volume 2: pages 739-740, 804-806; 2004 second edition, volume 4: pages 847-848, 913-915). Alexey Spiridonov published a very nice article about it and its solutions in 2003 and posited an approach to solving the four-dimensional analogue. I don't know if this has yet been accomplished. George Miller, on one of his Puzzle Palace pages, has Donald Knuth searching (in 2004) for solutions to a 3x4x5 version of Hoffman's problem and finding three where one could squeeze an extra 28th block into a 12-cubed frame!
Posted by Hans Havermann at 1:44 PM No comments:

The stove is in, Hazel's pen has been rebooted, and she has been let out to scamper around the new floor and get reacquainted with the furniture. Sharing a kitchen with a rabbit might not be everyone's cup of tea but it is manageable and allows us to spend more time with her than we might otherwise.

Also, the kitchen opens onto our back deck and I have been known to let Hazel out occasionally to enjoy the great outdoors. Catherine is disinclined to do so, put off by the incessant self-scratching behavior of our rodent visitors.
Posted by Hans Havermann at 2:34 PM No comments:

Our kitchen makeover involved painting the walls, laying down a new floor, and installing a new stove. Here is Catherine lighting it. It still needs to be pushed back into its space between the cabinets but we will wait for help so as not to scratch the floor.

The oven part of our previous stove had not been used in a very long time because, many years ago, mice had gotten into it and made it their abode. Catherine has been using a mini-oven to do her baking since but I have not done any baking at all, which is a shame because I used to make some decent cakes. I will have to bake one for Catherine's upcoming birthday!
Posted by Hans Havermann at 1:23 PM No comments: