How big is my baby?

I caught this particular scene from the 1932 William Wellman film on TCM this morning and went about googling — unsuccessfully — for some reference (I vaguely remember its German counterpart played by my mother with one of her charges) to this baby teaching game.
Posted by Hans Havermann at 9:27 AM No comments:

Thomas Powers was a man of great mystery. He was taciturn to the greatest degree and would say nothing about himself. Mrs. Wolcott said that he came to her home in the later part of February from Philadelphia. For a long time she knew him simply as "Mr. Powers". He would say nothing about himself. He was a man of very peculiar habits in that he seemed at times utterly oblivious of his surroundings. While he did not rudely repel any advances to conversation with him, he would quietly withdraw. He did not care to talk about any of his work and when the conversation drifted toward that channel he would leave the room. He was a man of good habits, always coming home early and Mrs. Wolcott says that not over two or three nights did he remain out of the house after 9 in the evening, coming home early and immediately going to bed. About three weeks ago he was sitting alone in the sitting room, through which Mrs. Wolcott passed. She made some remark to him and when he looked up she noticed that his eyes were red. She asked him if he was ill and he said:
"No, Mrs. Wolcott. I'm not sick but I'm awfully homesick. I've never had a home since I was a child."
He broke into crying and Mrs. Wolcott asked him to come and make himself more at home and not all by himself. He seemed to cheer up and commenced to visit. He said again that he had no home and said he was afraid he might lose his position here. He told Mrs. Wolcott that he liked the place very much and hoped he could remain. Mrs. Wolcott tried to cheer him up and he burst into another fit of weeping.
Once he asked Mrs. Wolcott if she thought that any one would know him in Watertown. He would give no reason for his making such a strange statement. Since Sunday he had acted queerly. He seemed to lose his appetite and when Mrs. Wolcott asked him if he was sick he said he had not been well in two years, but that there was nothing serious. While the rest of the family might be talking and laughing loudly, he would drop off to sleep, oblivious of his surroundings and the noise.
On Wednesday night he ate little for supper and left the house about 7. A postal card from his brother was on the table and it was carried to him. He did not look at it, but simply slipped it in his pocket. With one of the boarders he walked to a cigar store, bought a cigar and said, "I'll see you again."

That was on 31 March 1909. Thomas Powers jumped into the Black River from Watertown's Court Street bridge. Except for the evening's darkness and the swiftness of current, his northwest view — downstream — would have looked something like this: 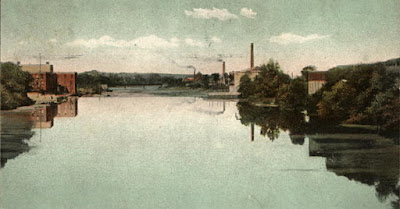 It would be 1915 days (five and a quarter years) before Thomas would be seen again: on the shore of Lake Ontario, near where Stoney Creek empties into it, 32 km southwest of Watertown. The trip downriver and through the lake would have been at least 50 km.

Thomas' suicide might have gone unnoticed were it not for the concern of his brother, James, who offered on April 10 — after a week of fruitless searching — a $100 reward for the finding of the body. On that same day another person, Thomas Blacklock, jumped off the Court Street bridge — but this would not become known until June 7, a couple of days after a Joseph Kellar, who had faked a suicide off the bridge on May 2, was found alive and well. Blacklock's body, found in Dexter on May 21, had been claimed — and buried — as that of Kellar.

Watertown Daily Times: 30 June 1914 — a body is found June 28 in Lake Ontario
The Lowville Journal and Republican: 9 July 1914 — how the body was identified
Posted by Hans Havermann at 7:09 PM No comments:

With her babe in her arms

Watertown, Aug. 10. — Mrs. John Powers this morning swore out a warrant for the arrest of her husband, who she claimed was drunk, disorderly and abusive. Powers was arrested and lodged in jail. He will be brought before Recorder Cobb Monday morning.
Mrs. Powers was seen at her home at No. 41 Morrison street, and told her story to The Herald man. Their home up to three months ago was at Munningar, West Mead county, Ireland. John was a good worker but spent all his money for drink. She thought if she could get her husband away from the influences of their old town he would do better, so they sailed for America. After a few days in New York city they went to Kingston, Ont., and from there to this city, where they have been only two months. About a month ago she complained of him but nothing was done.
Friday night John did not return at the usual hour and when he knocked for admittance at 4 o'clock this morning she started with fear to let him in, but before she reached the door he had got in through a window and began to threaten her and she fled to the neighbors.
She walked the streets with her babe in arms till a warrant could be procured. She also stated that they had had nothing to eat for two days and that he had spent all his week's wages but $3 for drink, when he was arrested. She said she wanted to be freed from him, declaring that she could earn a living better without him. Mrs. Powers will apply to Mrs. N.C. Walker to have four of her five children admitted to the Orphans Home.

Exercise:
Determine a history of the Mullingar Powers' children and their descendants.
Posted by Hans Havermann at 5:11 PM No comments:

A little wildlife drama on our (the east) side of the Raymore weir on the Humber.
Posted by Hans Havermann at 2:22 PM No comments:

I ordered this TV from FutureShop and received it on 17.03.2012. The accompanying remote (AA59-00463A) did not work. Fortunately I have another Samsung TV and was able to use it to set up the TV and confirm that this was not a battery issue. I continued to play with the remote in the hopes that some minor jiggling or such would cause it to work, but it will not function.

I contacted FutureShop to see if they would replace the defective remote but they said I would have to ship back the entire TV and they would replace that. That struck me as the height of sillyness so, instead, I searched online for a replacement remote. I found one that looked like it at Amazon and purchased it.

It works fine, but it turns out that it is not identical to the one that came with the TV. The Amazon remote (BN59-01042A) has some different button designations and lacks the SLEEP button that I want.

How can I exchange my defective remote for one that works?

We understand that the remote control supplied with the TV is not working and the you have purchased another remote control that is not the exact unit for the TV model.

We are sorry to hear that.

We recommend you access the below link for some troubleshooting steps to isolate the issue when the remote control is not working.

You will need to isolate if the issue is with the remote control or the IR sensor on the TV.

To replace the remote control with the correct part number, you need to contact the store from you purchased it.

The following day I received another email from Samsung titled ‘Thanks for signing up with Samsung’ and stating: “Thank you for your interest in Samsung. Now that you've joined us, you'll be in the know about everything Samsung...” I did not of course sign up — I asked for product support. There was a “click here to unsubscribe” notice near the end, so I did and, after confirming my wish to be removed from their mailing list, was greeted with “We're sorry to see you go. Please allow 7-10 business days for us to process your request.” Oh my!
Posted by Hans Havermann at 11:11 PM No comments: