When I wrote my Weston bones article eleven days ago, I was under the illusion — based on my interpretation of the 1911 newspaper articles — that the find was underneath what was to become Westminster Church School. In a cover story at WestonWeb, a Chris (from the Toronto and Region Conservation Authority) commented that the bones site (AkGv-6) was here; in other words, a little further south. This had me look again at the upper half of the photograph: 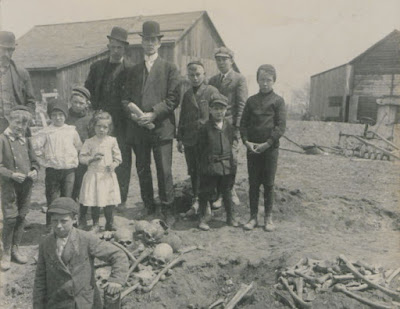 There are two buildings in the background and I thought I discerned utility poles in the gap between them. This had to be Main St. — now Weston Rd. Below is a depiction of this part of Weston — a 1910 map (on the left) and a 1913 map (on the right). Main St. runs from upper left to lower right, cutting each map roughly in half. 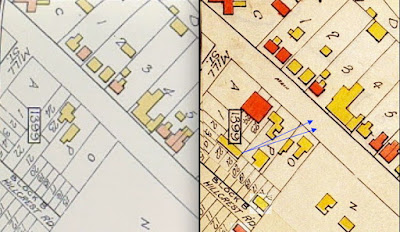 Yellow structures are made of wood; red, of brick. In the three years between the maps some new buildings have appeared. Some of the wood structures have been replaced with brick. There are also some subtle displacements. In particular, the only two structures below Main St. in 1910 appear on adjacent lots in 1913. I don't think they moved the buildings to make room for the Sunday School (which appears as the big red square). Instead, it seems likely that the 1910 placements were made in error and corrected in the 1913 map. Good thing. You see, I thought those two structures were the buildings in the photograph. But there wasn't enough space between them to account for the gap in the photo. With the 1913 correction, there is now a reasonable window of Main St. (blue arrows) from some location south of the school. And this jives with Chris' placement of the bones site.

Addendum: I've just replaced the maps picture with a new version that has pasted into place (in the 1913 part) two buildings at the end of Hillcrest Rd. that appeared in an adjacent map plate and should therefore have appeared in this one. The newly added brick building now at the bottom of the map appears to be #28 Hillcrest and directories tell me that a Frank Munshaw lived there. Mrs. Munshaw was mentioned in the 1911 Globe article:

Two splendid skulls, however, were rescued from the depredations of the innocent pillagers by Mrs. Frank Munshaw, whose husband is the tenant of the property in which the skeletons were found. 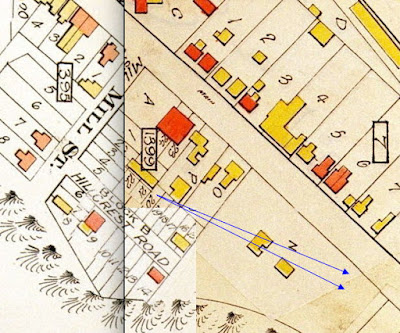 Now hear the word of the Lord!
Posted by Hans Havermann at 12:00 PM