I mentioned George Hennessy on Saturday in the context of a plant in his possession prior to his 1969 death. In 2013 I was given access to a photograph of George in front of a grocery:

I did not then have an address for it although I knew that the 211 in the window was likely its street number. I have now been able to ascertain that it was 211 Dovercourt Rd at the north corner of Foxley St. Google's street view suggests that the current building is not what it once was but, interestingly, there's a bodega on the south side of Foxley that featured in a BlogTO story last week.
Posted by Hans Havermann at 12:48 PM No comments:

Yesterday Catherine watered her snake plant, which she does every two months or so. This plant came from the home (412 Strathmore Blvd., the residence of William Edward Hall and Annie Harriett Edwards from 1927 to 1932) of George Hennessy subsequent to his death on 28 Dec 1969. After his third wife, Annie (Hall, previously mentioned), died on 26 Aug 1963, George travelled from Toronto to England to look up (unsuccessfully) the remnants of his family, having had abandoned in 1919 his first wife and their children. Here he discovered that he had a niece (Catherine's mom) also living in Toronto!

I'm not sure when they first got together but I have photographs of him dated 1966. By this time George was 86 and losing his vision. Catherine and her mom used to go to George's house to help out with household chores. Here's an undated photo of George with two of his sister Ada's daughters (Elsie, on the left, who had travelled from England to be here, and Lilian, on the right, Catherine's mom): 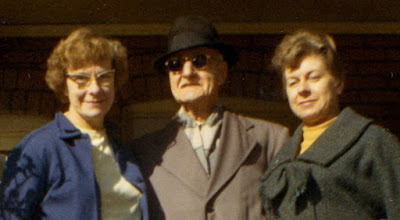 The plant is indisputably 51 years old. If it was Annie's Sansevieria, 57 or more. A couple of websites suggest that the longevity of this plant is 20 to 25 years. Clearly, nobody knows.
Posted by Hans Havermann at 4:30 PM No comments:

The chess scene in Mahapurush

Some six-and-a-half minutes into Satyajit Ray's 1965 The Holy Man, we are presented with this board position:

The black pawn on a7 is obscured and the black knight on e6 is difficult to make out — but as Qxf3+ we see them:Still obscured is a white pawn on a2 but a shadow suggests it is there. White struggles with his reply while someone in the background rants. Finally, after almost a full minute, white plays Rg2. Then the clearly rattled white player says to the third party: "Your whining cost me a bishop!" That would have made sense if the white queen on f3 had been a bishop. The position is now a mate in two (Nf4). But after another minute it appears that Black had played Qd1+ (one screen frame makes it appear that the queen might actually be on c1 but that is of no consequence). Another minute before White blocks the check with Rg1. Then Qxg1+ and, ten seconds later, Black lets White know: "Mate in two moves, my friend." Of course it is not, anymore. Finally, four minutes after our first glimpse of the board, the white player pounds his fist into it and upsets the pieces. He shouts: "Chess is an intellectual game. You can't play it where there's pandemonium!"
Posted by Hans Havermann at 5:43 PM No comments: 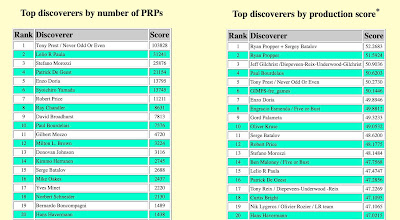 This morning I reached #20 in the production score of the probable-prime top-discoverers leaderboard. I was already at #20 by number of probable primes and it is relatively unusual to be in the same position in both lists. Of the 1438 probable primes noted, all but 52 are Leyland primes. My work on finding more Leyland primes continues unabated as my current worksheet clearly shows: 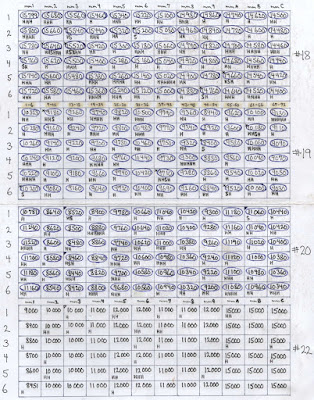 Intervals #18-#20 are done. Interval #22 shows 34 recent finds of an expected 100 or so by this time next month. That will push me to #19 on the number leaderboard and possibly to #18 on the production score list. Alas, I will still be several dozen short of my strived-for 1500 Leyland-prime finds. Being so close is incentive enough to continue. Once interval #22 is completed I will be looking at Leyland numbers ranging from 300000 decimal digits length up to 305000 decimal digits. I don't think there are enough probable primes in this region to make up the deficit but it will bring me much closer.
Posted by Hans Havermann at 9:00 AM No comments:

Much ado about directed energy attacks 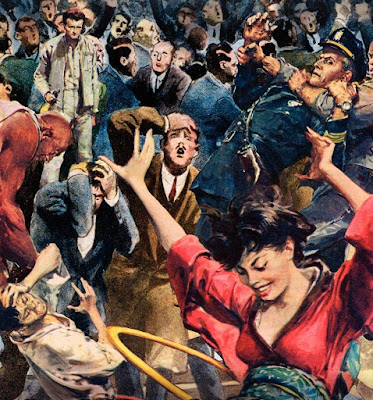 I'm increasingly annoyed by the lack of skepticism in the current round of media hype about "directed energy attacks". After the first reports of an "acoustic attack" made their debut in 2017, I was certain that an element of mass hysteria was at play. I have just come across Robert Bartholomew's excellent analysis in Skeptic that arrives at a similar conclusion.
2022 January 22: John Iadarola and Brett Erlich break it down on The Damage Report.
Posted by Hans Havermann at 1:38 PM No comments: