"As a general rule, those who think they know everything about a subject really know very little about it; those who know most feel their lack of knowledge, and are always anxious to learn more."
— The Abstainers' Advocate (1894)

Around 1960, Harold Pullman Coffin cleverly rephrased this as: "The fellow who thinks he knows it all is especially annoying to those of us who do." There's a quotation website that annoyingly confuses this newspaper columnist with creationist Harold Glen Coffin. All of the quotations are Pullman's but the photo and the bulk of the bio is for Glen!
Posted by Hans Havermann at 1:40 PM No comments:

After my previous attempt at a grocery delivery service I wasn't particularly anxious to go at it again, but it was either that or actually going to the store. I tried the delivery arm of the local Real Canadian Superstore where we usually (i.e., used to) shop. They listed most of the products I was after except bags of big carrots, so I ordered a bag of baby carrots instead. The total for the order was just over $200 and I gave them my credit card info for payment. There's a $4 delivery fee, a 5% service fee, and a suggested 5% tip for my shopper/deliverer. The order arrived a couple of hours ago, a mere 22 hours after I placed the order!

They reduced the 8 cans of green beans that I ordered to 0 cans, 8 cans of lentils to 4, and 8 big containers of yogurt to 3. That's ok. I had ordered 4 two-litre containers of 1% milk. I was brought 4 one-litre containers but they charged me for the two-litre containers. That's not ok. The plain bagels that I ordered were replaced with sesame seed bagels, which might be ok but I won't know till I try one. The 8 PC white-cheddar mac & cheese boxes that I ordered were replaced with KD regular mac & cheese. I thought that was going to be ok but I just made myself a couple of boxes and it's inedible (although I did eat a bit and now I'm feeling queasy). I'm going to have to throw that out and hide the other 6 boxes.

I asked for a refund on the missing milk. I didn't ask for compensation on the mac & cheese because I reported the problem before I tried it. On the plus side, they did deliver all 24 rolls of toilet paper that I ordered!

Update: I went back to the site and asked for a refund on the mac & cheese. After all, it's a business transaction, so why should I shoulder the burden of their mistake? Incredibly, Instacart Support (who seems to be the go-between here) not only refunded the mac & cheese, but also all 4 of the two-litre milks — it should only have been 2 of them. They call it their "customer happiness refund". In return, they hoped I would check their "Good, I'm satisfied" support followup (as opposed to "Bad, I'm unsatisfied"). How could I refuse.
Posted by Hans Havermann at 8:00 PM No comments:

Somebody sure is pissed! 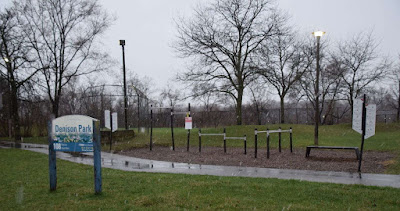 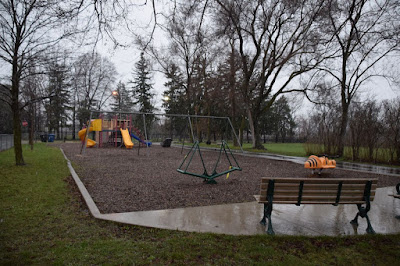 Not only has the caution tape been removed but the "Hey there!" sign is gone. Could it be that our neighbourhood exerciser took offence?
Posted by Hans Havermann at 12:24 PM No comments:

We are falling down,
Down to the bottom
Of a hole in the ground.
Smoke 'em if you got 'em.
I'm so scared, I can hardly breathe.
I may never see my sweetheart again. 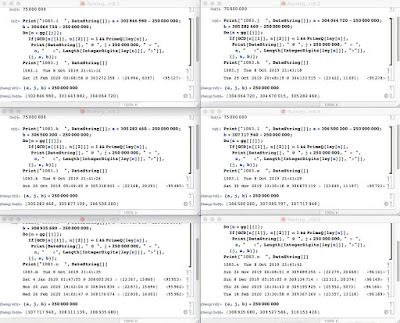 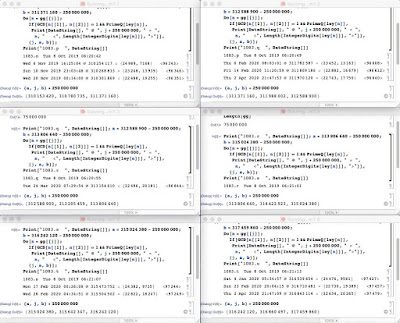 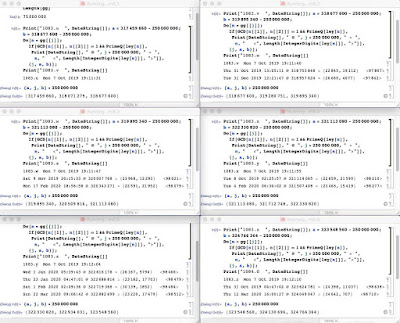 It has been six months since I started three of my Mac minis on a Leyland prime search from Leyland #302846980 to Leyland #324766364. That range was divided into 18 parts of mostly 1217740 Leyland numbers each and these parts were distributed across the Mac minis for 18 Mathematica programs to each do a probable prime search. The above three pictures show what I see on those Mac minis, each Mathematica window with its own start date/time, subsequent finds, and at the bottom of each window — determined by manual interruption of each program — how far (the middle of the three numbers) it has come in the search.

The how-far numbers are from 47.8% to 51.5% of their respective search spaces, so clearly I have another six months to go before I am done with this section. I count 35 prime finds of which 34 are new (one is a rediscovery of Norbert Schneider's L(34642,707) that he found in December 2017). Somewhat remarkably, the three Mac minis have run for all this time without interruption. They are hooked up to battery backups and what power failures we have had in the last six months have thankfully all been very brief.
Posted by Hans Havermann at 10:20 PM No comments: 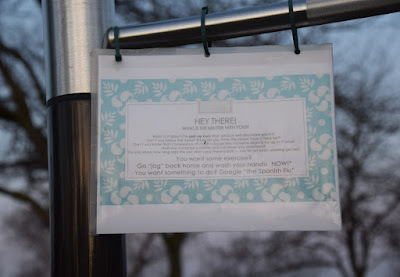 The name of the virus is "severe acute respiratory syndrome coronavirus 2 " or "SARS-CoV-2" for short (the disease that it causes is COVID-19, which will soon enough become Covid-19 as folk tire of the all caps). Of course viruses are not technically alive, so it is better to say that they are detectable on surfaces for a certain period of time. And in my mind at least, it is not at all clear that detectable equals infective.
Posted by Hans Havermann at 10:00 PM No comments: 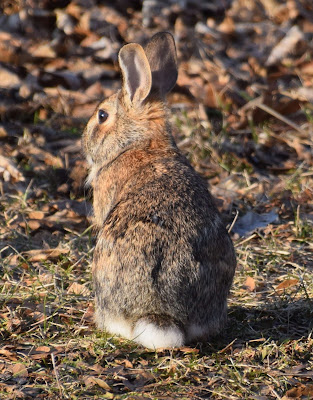 I've been spotting cottontails in the neighbourhood on my morning walks for some weeks now. At least that's what I think they are. In and around Denison Park, along Denison Rd. W., even on Sykes Ave. For decades there's been nary a sign of these critters around here. The coyotes came first. Now rabbits. Makes perfect sense!
Posted by Hans Havermann at 8:31 PM 1 comment: 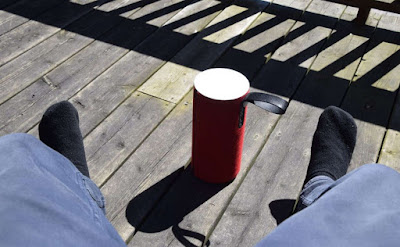 I am sitting on the back deck in the glorious sunshine, listening to some random tunes in my Join-In-Daily playlist. Could life be any sweeter?
Posted by Hans Havermann at 1:21 PM No comments: