Posted by Hans Havermann at 1:38 PM No comments:

The iMac from hell

I had mentioned in my previous post that I was considering purchasing a new computer "if I can trade in my old kernel-panic-plagued late-2015 one". When I bought this iMac it was pretty much top of the line. 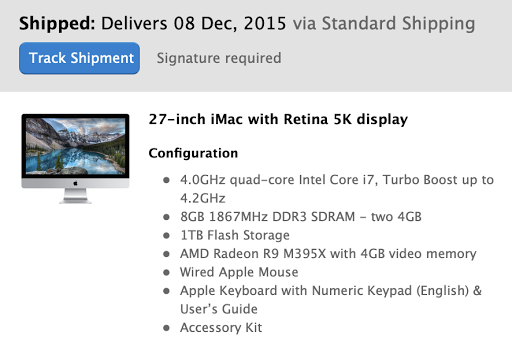 SSDs were expensive and 1 TB was as big as Apple was willing to provide at the time. The standard 8 GB RAM was going to be replaced with 64 GB purchased from Other World Computing (Apple has always been incredibly ungenerous with its memory pricing).

I experienced my first kernel panic on the new iMac on 23 December 2015, 15 days after receipt. There was another one on 9 February 2016. I seem to have been panic-free until May 8 and then more on May 14, May 21, and May 22, when I decided to do a RAM switch. In addition to the kernel panics there was other weirdness happening in my running Mathematica Leyland prime searches. For example, the Mathematica front end would lose its connection with the Mathematica kernel. Mathematica was pretty much the only thing I was running on this machine.

I tried an OS reinstall on June 13 but the situation did not improve. I should of course have brought it back to Apple before its one-year warranty ran out but I was still under the impression that it might be the third party RAM and, besides, Catherine was increasingly anxious about driving and I did not ask her for the ride.

By July 2017 I had boxed the iMac from hell and purchased a new one, the one that I am currently working on. It's been fine but the 2 TB SSD is getting full. A 4 TB SSD in a new iMac should do the trick for a few more years. Plus I can upgrade to 128 GB RAM. The idea of trading in the defective iMac seemed like a good way to reduce the cost.

Phobio is Apple's official Mac Trade In partner for U.S and Canada. When I tried to evaluate nine days ago my late-2015 iMac on Phobio's website (by entering the computer's serial number), I got this: 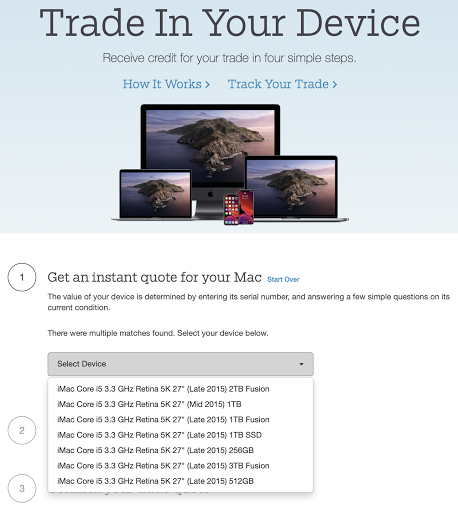 My device (iMac Core i7 4.0 GHz) did not appear! Selecting one of the Core i5 alternatives instead would of course end up in my iMac being undervalued and this was not fair. So I sent an email (August 14) to Phobio explaining my dilemma. No response. A followup email (August 19) noting the non-response and asking for them to "please let me know" has also not gotten a reply. At this point I am entertaining deep-Apple conspiracy theories about what is going on (and I'm not the sort of person who entertains conspiracy theories).

Strangely, my late-2014 iMac which has never had kernel panics before started to experience them in June 2019. At any rate, I will give up for the moment the idea of trading in the late-2015 machine. I'll likely still purchase a new iMac but am unsure as to when.

A look ahead (reprise)

A year ago today I charted the expected progress on my five-year indexing-the-Leyland-primes project. Having a few days ago finished interval #10, I anticipate intervals #11 to #13 to be done by September, and #14 by October, all thanks to Mark Rodenkirch's xyyxsieve and pfgw.

As I am no longer burdened by my previous reliance on Mathematica 9, I may even update everything to macOS Catalina one of these days. A new iMac is also being considered (if I can trade in my old kernel-panic-plagued late-2015 one). After I've finished interval #14, I will have tabulated all Leyland primes up to 103013 digits. Interval #15 will start there and continue on to the end of interval #28, reaching 150000 digits:

The column after the interval is the number of Leyland numbers between the end-points of that interval, followed by how many of those remain after sieving to the subsequent quantity (in brackets). This is followed by the number of iMac-mini cores working on primality testing and the start and finish dates (~ added if in the future). Initially, in addition to intervals #15 and #16, I will be having a go at interval #28 in order to up my PRPTop production score.

Posted by Hans Havermann at 2:16 PM No comments: