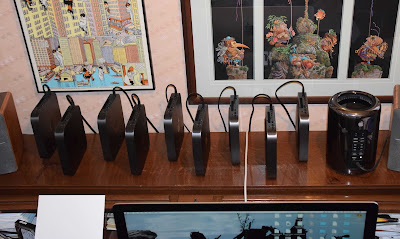 I moved the printer from my rolltop desk's back ledge to make room. The task on Mac mini #7 was moved to one of my iMacs, thus freeing it, along with Mac mini #8 and Mac mini #9, to contribute to the Leyland prime search. Thus, I have added 18 cores to the 36 already in the farm. This should take 8 months off my projected two-year search schedule. As a test run, I've started the three additional Mac minis to do half of interval #2. Then I'll set them to run half of interval #14 (which will take 8 months), after which they'll tackle the other half of interval #14 (which will take another 8 months).
Posted by Hans Havermann at 2:00 PM No comments: