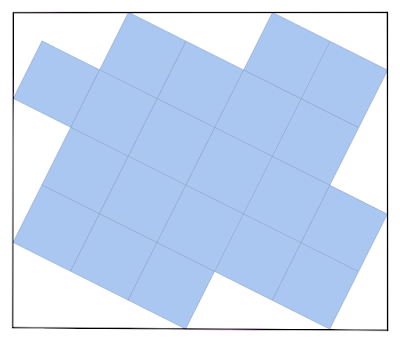 The blue mesh consists of unit squares. What is the area of the black rectangle?
Posted by Hans Havermann at 3:36 PM No comments:

I haven't been totally committed to the task for the entire period but I may perhaps have spent six months on it. Since I've only covered about one fifth of the territory, I have two years to go! I was going to add some processors to the task but my intended purchase of a new machine has (sadly) been stymied. There was a second issue. My list of sorted consecutive Leyland numbers only went up to #331682621, having been computed with the sole objective of reaching 100000-digit numbers (which it did). I thought I was going to need the new computer to calculate more terms because my indexing computation was limited by available RAM and my current machines can't take any more than 64 GB. Fortunately, I recently discovered that that was sufficient to extend the indexing to L(40945,328).