On 17 September I experienced a significant outage on my Teksavvy internet feed. When it finally came back, I rebooted the modem, noticed that my domain no longer pointed to my computer, and made the change to the new IP address at DynDNS. I then sent an email message to an acquaintance. I have an automatic BCC to myself to let me know that messages are in fact being sent — and this one was not. So I tried some more test messages, none of which were being delivered!

Two days later, the situation had not resolved itself and I Gmailed Teksavvy support for help. After the usual security clearance, they sent me a long questionnaire — meant to rule out some obvious causes of failure. Some of the directions in that questionnaire made it obvious that they had no more than a passing acquaintance with Apple OS X and, along with my answers, I expressed: "I'm a little concerned about your lack of Mac experience as evidenced by several mistakes in using-the-terminal instructions. Other OS X references are stale at best. The current OS X is 10.12 and the location of the 'Network Utility' hasn't been where you say it is for some two years!"

On 26 September, they finally opened a ticket with their "Tier 2" department. This meant, I suppose, that this was not an obvious failure and they were prepared to take my issue seriously. What followed was an attempt to have me send a message in something other than Apple Mail because they were able to send something (using my account) by way of Microsoft Outlook. And I did manage eventually to send something using Mozilla Thunderbird, so it was (obviously) only a problem with the Apple Mail program.

Well, not so fast. On 25 September I had created an email account with Bell. The setup was straightforward and my first message — using Apple Mail — arrived at its destination immediately. Nothing wrong with Apple Mail! From Teksavvy's perspective, all I had to do to fix my problem was ditch Apple Mail. From my perspective, that was never going to happen. I've been using Apple Mail for some fourteen years. I've been using Teksavvy for five years. So long.
Posted by Hans Havermann at 11:55 AM No comments:

When I introduced my k-balanced factorizations last month, I noted that there were over 13000 of the 2-balanced variety. My effort to chart them all is proceeding slowly, with a couple of months yet to go before I reach 10^12. In the meantime I decided to have a try at the ones greater than 10^12. This can be accomplished by brute-forcing all possible ways of creating a valid factorization using seven or fewer digits. I generated no solutions for one to four digits. For five digits, one gets the 4 solutions of the known 1-balanced factorizations (that started it all):

These then are (necessarily) the largest 2-balanced factorization integers! I'm going to run the program again for eight digits. This will generate all 12-digit 2-balanced factorization integers and may do so (I'm hoping) in less time than my exhaustive forward search. In addition, there's a chance that it may find a k > 2 solution, since nothing in the reverse search precludes it.
Posted by Hans Havermann at 11:55 AM No comments: 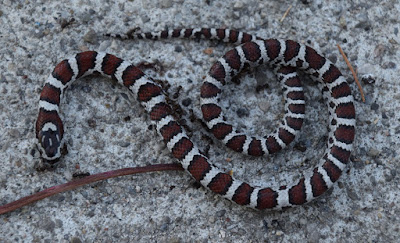 The only snakes I have ever seen here in Toronto are garters. So when I came across this deceased (note the ants) juvenile by the curb in the road, I had to look up what kind it was. I have since been told that an adult eastern milk snake was spotted by a homeowner across the street from this scene. That person's home is right above the new retaining wall on the Humber river. So this snake's habitat has been disrupted by the construction, resulting in its being noticed where it might otherwise never have ventured. Hopefully it survives.
Posted by Hans Havermann at 9:09 AM 1 comment: 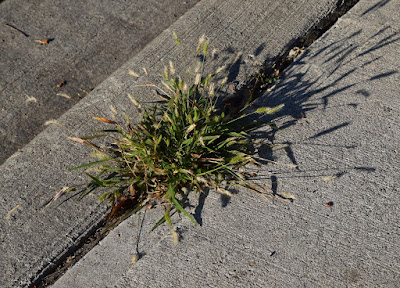 The sealant in the expansion joint between a sidewalk-proper and its curb degrades over time, allowing a few hardy species to gain a foothold. I assume there's a root system that manages to find its way beneath the concrete. Gotta love these plants! 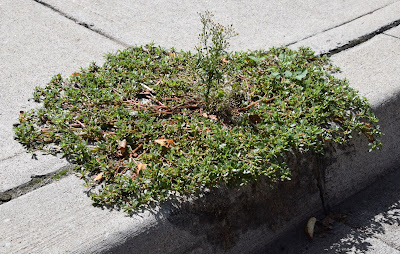 Posted by Hans Havermann at 10:48 AM No comments: