I was looking through some of my old letters to the editor (mostly to The Globe and Mail) in my online library access to local newspapers when I noticed a 1936 Daily Star hit for my surname "Havermann": 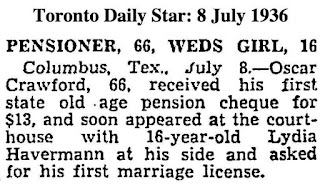 The story had been picked up by a good number of other newspapers. Here is a transcribed version from Whitewright TX (July 9):
Love in his heart, a $13 old-age pension check in his pocket and a 16-year-old bride at his side, Oscar Crawford, 66, Tuesday retired to his eighteen-acre farm for the first honeymoon of his life. Crawford on Sunday received his first State old-age pension check. At noon, he appeared at the Colorado County courthouse with Miss Lydia Havermann, 16, at his side. Clerks declined, however, to issue a marriage license until the father of the bride, William Havermann, appeared and gave his consent. While the father looked on approvingly, County Judge H. P. Hahn read the marriage ceremony. The bride and bridegroom left immediately for the C. W. Ellinger farm, five miles east of Columbus, where the bridegroom is cultivating eighteen acres.
There's a follow-up, datelined UP, Austin TX (July 10). My transcribed version is via the Big Spring Daily Herald:
Oscar Crawford, 66-year-old Colorado county farmer, who recently married Lydia Havermann, 16, may have increased his income by so doing, or he may have lost it entirely. Crawford married Miss Havermann in Columbus on the day that he received his first old age assistance check from the state. The check was for $13. "There is a possibility that his pension check may be increased," Orville S. Carpenter, old age assistance director, said here. "Since he is married he now shares his property with his wife. Thus his income is only half as much." This is the first of such cases to arise since distribution of the checks was begun July 1. Section two of the old age assistance act provides, however, that he can receive assistance only if he "has no wife able to furnish him adequate support." The word adequate is not defined.
The marriage was easy to verify: 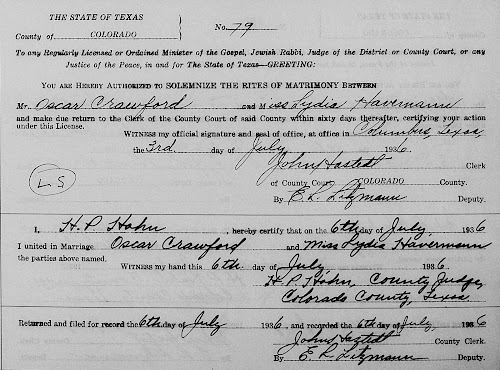 Somewhat more difficult was what became of the bride and groom. It had me stymied but my research associate, Marlene Frost, quickly found a large number of relevant documents. First off, we have Oscar's death certificate: 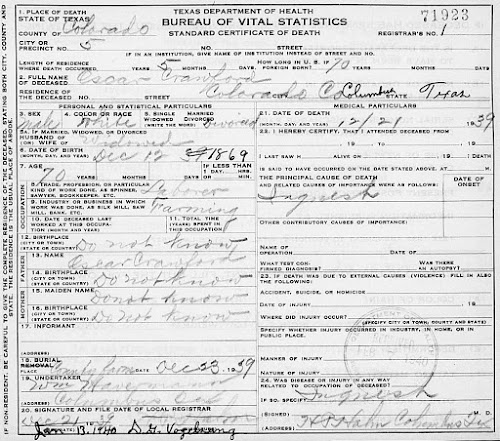 Oscar is shown as having been born on 12 Dec 1869 and dying on 21 Dec 1939. The cause of death appears to be under investigation (the word is "inquest"; thanks Alfy and Cathy for deciphering that). Oscar is "divorced", although (annoyingly) his former partner is referred to only as "widowed". The undertaker is noted as "Wm. Havermann", Lydia's father. William may well have buried Oscar but he was a farm hand, not an undertaker.
Lydia's name appears in the April 1930 census (Fayette County TX) showing her as being 7 years old:

That would have made her only 13 when she married Oscar and 17 when he died. Lydia is not with her family in the April 1940 census. Over the years, the 'r' in this Havermann clan appears to have been dropped. Lydia's parents and three of her four brothers may be found in Sealy Cemetery. Her brother Arnold Havemann (born 24 Jul 1931) is married to a Gloria Lois Abel (born 20 Jul 1937) and they have two children, Charles Arnold Havemann (born 28 Mar 1960) and Tracy Kim Semmler (born 5 Nov 1963).
After considerable digging, Marlene finally unearthed Lydia's birth certificate: 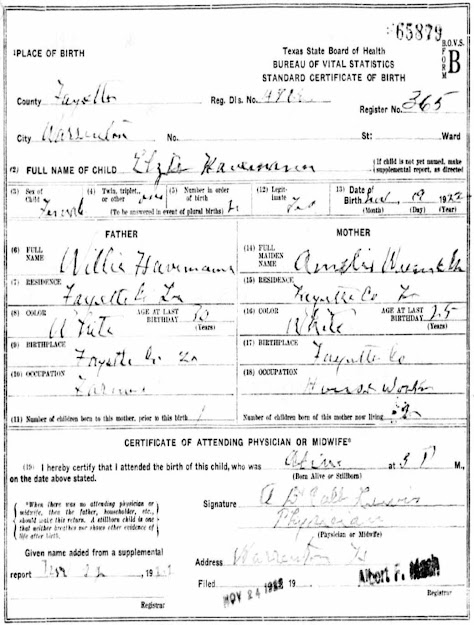 She was named Elzie (born 19 Nov 1922). If one thinks of the name as being a shortened Liz'beth then Lydia shares with that the initial sound. It seems that Elzie may have run away from her marriage to Oscar Crawford and took on an assumed name, ending up in Atoka County, Oklahoma. She had a son, Jimmie Roe Boggs (born 5 Oct 1938). In May 1941, as Katie Belle Boggs, she married a 42-year-old Homer Goodson and bore him eight children. In 1953, her father signed an affidavit changing her name from Elzie to Katie Bell:

Katie Bell died in 1971 and has a final resting place in Farris, Oklahoma. Note that the birth year on her headstone is incorrect.
Posted by Hans Havermann at 8:20 AM No comments:

According to a Canadian Press story today, public safety minister Bill Blair says police misconduct is indefensible. Yet ten years ago, under his leadership, he was defending just such misconduct.
Posted by Hans Havermann at 9:10 PM No comments:

Posted by Hans Havermann at 8:15 AM No comments:

Posted by Hans Havermann at 8:43 PM No comments:

Posted by Hans Havermann at 8:30 PM No comments: 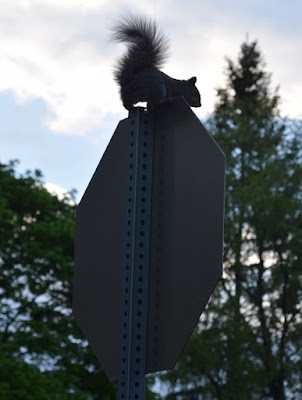 Squirrels practice physical distancing by running for the nearest tree. This squirrel quickly learned that the square metal post holding up its stop sign wasn't very arboreal.
Posted by Hans Havermann at 7:23 PM No comments:

Yes, we have no plain bagels

We had another grocery order/delivery yesterday. We're good on most of the essentials (bathroom tissue, paper towels, canned goods, bread) but I'm having difficulty acquiring my plain bagels which have been "out of stock" for a while. In yesterday's order I was prepared to go poppy-seed or even sesame-seed, but they weren't available either. The "everything" bagel was a dollar more than what I'm used to paying for a 6-pack and I wasn't sure from the pictured packaging that it was anything more than poppy and sesame seeds on a plain bagel. So I gambled. Alas, they also contained dried onion and roasted garlic, which are anathema to me. I hope the birds aren't as fussy. 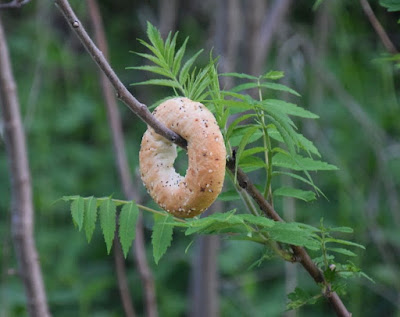 Posted by Hans Havermann at 1:53 PM No comments: