Today's Futility Closet features lateral thinking — which folk of my generation associate with Edward de Bono's 1967 "The Use of Lateral Thinking". Wikipedia suggested that de Bono had coined the expression. After a quick check with Google Books, I decided to replace "coined" with "promulgated" but, alas, most of my earlier-than-1967 references turned out to be later ones — a hazard of Google Books' date-assignment methodology.

Fortunately, I did find one that did not so evaporate. It is from Edward T. Owen's article "Linguistic Aberrations" in the "Transactions of the Wisconsin Academy of Sciences, Arts, and Letters" (volume XXIII, 1927, page 434):


In matters mental, for convenience, let it be supposed that we have reached our limit with e. g. the idea-plexus indicated by the woman and her prepossessing qualities. Our words for these we shall marshal as we please, for the ideas of each of us are simultaneous. The like is true of the husband and his qualities. And even when I say "There is a handsome _ _ _ _ woman with an ugly _ _ _ _ husband", I exhibit what might also be regarded as a single mental picture, since it is continuous. Its continuity is however that of the old fashioned panorama. Its constituent pictures come upon the mental stage successively. No doubt, indeed, while thinking of the woman I am also conscious of the man to come. The mind is somewhat like the eye; even the momentary scope of either is considerable. While intently looking at you I take note of the surrounding objects. While I add my bank deposits, I am wondering if the total will be big enough to pay my bills. The eye does much by lateral vision and the mind by lateral thinking.* But such seeing and such thinking are both vague. My lateral thinking of the man to come is not presumably distinct enough e. g. to meet the needs of word-selection.
________
* I do not intend by "lateral" that only which is figuratively conceivable as to the right or left. I have no faith in mental limitations thus suggested. Were the word "eccentric" not preempted, it would serve my purpose of suggesting what is in the mind but is not central — whether to the right or left, above, below or even too near, too far — say out of focus — I care little.
Posted by Hans Havermann at 12:21 PM No comments:

The U.S. Geological Survey has a latest earthquakes website that you can configure (and then, bookmark) by clicking on the white gear icon (top right) for options and settings. From the defaults I change the Earthquakes to 1 Day, All Magnitudes Worldwide, the Map Layers to Terrain, and the Time Zone to Local System Time. You can then click on the now-cyan gear icon to dismiss the right settings panel. Likewise, you can click on the cyan list icon to dismiss the left list panel. That leaves you with a cyan globe icon and a default map of the United States. You can now zoom out (or in) by using the plus/minus signs at the top left (or by using your scroll wheel). I get it to some manner of world-view that fits my particular browser window size and this I bookmark.

When a large earthquake hits, I scroll wheel over the place to zoom into it and often leave the browser tab there for a few days to watch the aftershocks develop. The following is a screen grab of the current situation based on yesterday's 7.8 Solomon Islands quake. With Auto Update on, new aftershocks will appear and stay red for an hour. 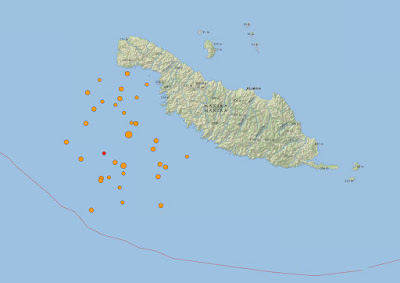 I love the detail in the zoomed-in maps. I'm intrigued by the fact that (in the above map of Makira) four of the islands to its north have an identical high point of 91 m (above sea level).
Posted by Hans Havermann at 10:35 AM No comments: 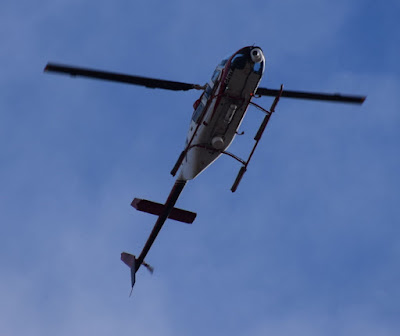 When you hear/see a helicopter hovering overhead here in Toronto, it's an indication of a nearby news story. 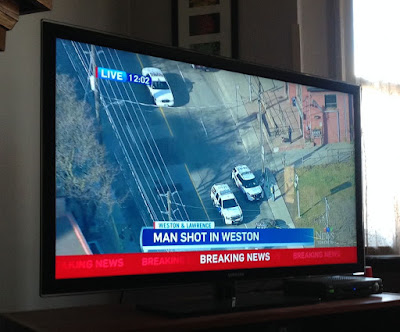 Posted by Hans Havermann at 2:45 PM No comments: