I've written about Stewart Coffin's Convolution puzzle before. John Rausch has a partially assembled Convolution on his Puzzle World website, to which I have added x,y,z axes and red line that goes from (2,2,2) to (2,2,3):

Three pieces (F, D, and G) need to be added to the assemblage. The black cubies end up in the corners of the finished cube. Also, F and G are seriously foreshortened (what look like one-cubie extensions going to the back are actually two-cubie extensions). The number of cubies in each of the three unassembled pieces is 9 (to fit into the 27 empty spaces of the unfinished cube). Can you complete the construction in your head?


I'm going to describe in some detail the 'rotation' that makes Convolution such an interesting puzzle. Bill Cutler once told me that he had done the math, but any mention of the rotation today (as far as I know) neglects to provide any details beyond pointing out that one or more cubie edges are slightly rounded to allow it.

It is D that is the next piece to get added to the unfinished assemblage. Because there is some degree of freedom in how initially this happens, I will describe instead the reverse process: how D is removed from an assembled cube where G and F (in that order) have already been removed. In its final resting place, D's black cubie will sit at the (0,4,4) corner of the finished cube. The other end of D (the final cubie of the three-cubie straight arm) will sit underneath the black cubie whose corner is at (4,0,4). How it got there is of course what this blog entry is all about.

All the action happens in a space parallel to the xy plane (from z=2 to z=4). To dislodge D, first it is pushed down the y-axis by one unit. Having done so, the view of D from above the xy plane will be: 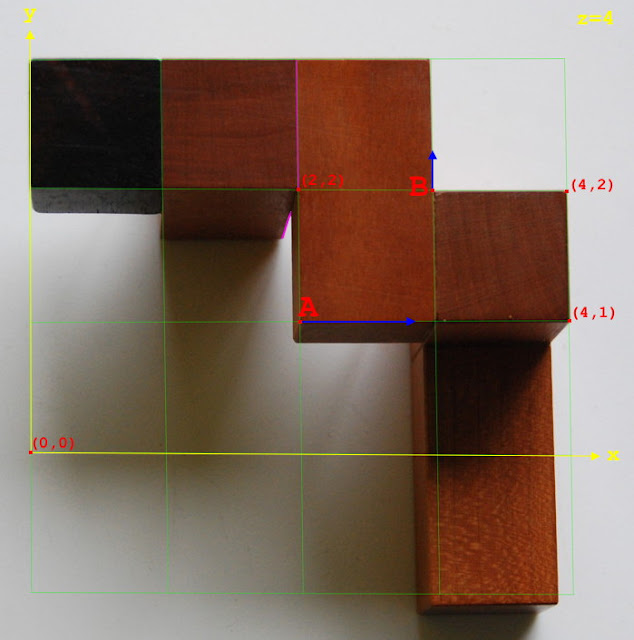 Is this the only edge that is compromised? Convolution designer Stewart Coffin said that the assembly "requires a rotation, which is not possible unless certain edges are rounded ever so slightly". [The Puzzling World of Polyhedral Dissections, 1990, page 52; or here]. So he implies more than one. But this may have been a woodworking — not a mathematical — depiction. Once the (red) edge has been rounded, it allows the rotation/slide to proceed slightly before the one-unit push down the y-axis is fully complete, but at the expense of the lower-level B-point edge on the D piece.

In that 1990 reference, Coffin asks: "Can any reader devise a way to correct this mechanically slight but mathematically crippling deformity in an otherwise satisfactory design?" I discovered this week that such an improvement exists.
Posted by Hans Havermann at 1:11 PM No comments: