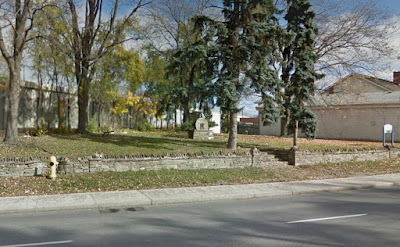 There's a forlorn triangle of green some two kilometers northwest of my Weston home that marks the first European settlement in this particular locale. Hemmed in by a rail corridor (to the north) and a busy Weston Road absorbing mostly north-bound traffic from St. Phillips Road, it's an unlikely spot to stop and stay awhile. Within Northend Parkette is a millstone monument, below which a plaque reads:

A grist mill & sawmill, built by David Holley in 1810-11, stood in the valley below. James Farr, to whom the mill belonged from 1815 until 1828, operated five run of stones in his mill. The lower & older part of the village of Weston, formerly known as Farr's Mills, was destroyed in the flood of 1850. In 1828, William Wadsworth bought the mill rebuilt & operated the sawmill, 1830-1870, & built a larger grist mill in 1856. The Wadsworth mills operated in this vicinity for 87 years.

My transcription is identical to the one posted at this website, except that they added a comma that I don't believe is there. The "valley below" is the Humber River valley, due west across Weston Road. In fact, Farr's mills were just a tad further than the downslope of the immediate valley. They were on the other side of the river, presumably in this golf-course section of faux greenery.

There's another plaque dedicated to the founding of Weston in Little Avenue Memorial Park, a little closer to the community's business hub. It reads:

Settlers were attracted to this vicinity in the 1790s by the area's rich timber resources and the water power potential of the Humber River here. By 1792 a sawmill was established on the west bank and within two decades a small hamlet, known as "The Humber", had developed. About 1815 James Farr, a prominent local mill-owner, named it Weston after his English ancestral home. The community subsequently expanded along both sides of the river until 1850 when a disastrous flood destroyed the west bank settlement. Improvements to the Weston Road and the arrival of the Grand Trunk Railway in 1856 stimulated substantial further growth on the east side. Incorporated as a Village in 1881, Weston became part of the Borough of York in 1967.

A slightly different narrative. A hamlet supposedly known as "The Humber" was renamed "Weston" about 1815. This almost certainly comes from the pens of Frederick David Cruikshank and Joseph Nason who assert in their 1937 History of Weston (page 5): "James Farr objected to the name of 'The Humber' for the hamlet, as the name was being used by other settlements along the river, and, being the mill owner and leading figure in the village, renamed it 'Weston' after his ancestral home in England." Alas, it was 1815 when village folk likely began calling the place Farr's Mills and it seems unlikely that they would have called it anything else until after 1828. "The Humber" is just short for "The Humber River" and yes, of course, it will mean different places depending on where along the river one was situated. It is difficult to know how seriously one should take Cruikshank and Nason. The book is full of gossipy tidbits like this, provided without any accreditation or apparent circumspection (except when some juicy story "cannot be published in deference to the descendants of some of the principals", page 13).

The plaque's statement that "the community subsequently expanded along both sides of the river until 1850 when a disastrous flood destroyed the west bank settlement" has its counterpart in a 7 December 1881 (page 10) article in The Globe newspaper reporting that a Mr. William Watson of Weston, at a meeting of the York Pioneers, "took up the mills, tanneries, and distilleries of Weston, and the changes. Sixty years ago, on the York side of what is now the village of Weston — then Farr's Mills — there were only three houses, and those were the farmhouses of Colonel Allen, a Mrs. Davis, and a Mr. Hill. For years after that the village of Weston, which consisted of about fifteen houses, was almost entirely on the Etobicoke side of the Humber River, and owing to the heavy spring floods the people began to desert the place. In 1850 the entire village was swept away with the exception of one chimney."

Here's how Cruikshank and Nason describe it (page 13): "In the spring of 1842 there was a very bad flood on the Humber and several buildings of the hamlet were badly damaged. Again in 1850 the Humber, rising 20 feet above normal, put on the worst flood in its history and every house and shop in this compact little settlement in the valley was washed away or badly damaged by the huge cakes of ice. All that was left was the stone chimney of the cooper shop, which remained until comparatively recent years as a monument to the first village." A little down the page: "This was a great disaster, the destruction of a whole village by flood, and the homeless had to seek the kindly shelter of the few houses on the York side and of the farm houses in the district. In due course a petition was circulated among the refugees, and at a meeting held in St. Philip's Church on the hill they decided to forsake the original site in the valley, and Weston was rebuilt on the east side of the river along the Plank Road."

The Humber River separated Etobicoke Township (on the west) from York Township (on the east). It strikes me that when the village of Weston was incorporated in 1881, it did so under the auspices of York Township, which implied that the village's border formally ceased at the Humber River. That was certainly the case when Weston was incorporated as a town in 1914 (as maps of the town readily confirm). That left the Etobicoke residents of the formerly conjoined twins estranged from their village neighbours. Well, I don't know that it actually bothered anyone. More pertinent perhaps is that it established a de facto mindset of Weston being on the east side of the river.

There's another plaque at the northwest corner of Little Avenue and Weston Road (not far from the Founding-of-Weston one mentioned above) detailing — in a map — the Toronto Carrying Place, a portage trail running from the Humber River at Bloor Street to the Holland River, a considerable journey. You may be forgiven if you think that the dashed line segments represents an actual path, but in fact we know very little about the journey. The trail is just a supposed connection between the start and end points, ignoring the many places along the way where a canoe might sensibly be set in water.

Weston crossing the river is very much like that. We perceive it to be (Farr's Mills) on the west side at one time, then (the incorporated village) on the east side. Knowing very little about the journey, we simply connect the dots. Part of the problem is nomenclature. Farr's Mills undoubtedly refers to the structures on the the river's flood plain, ignoring the farms and other buildings (like St. Philip's Church) that were part of the larger, on-higher-ground "Weston" presence in Etobicoke. That presence grew into a significant community by the time the village incorporated. A Weston map of 1878 clearly shows what is now known as "Humber Heights" as a part of the village. Here is a detail from an 1878 Etobicoke map: 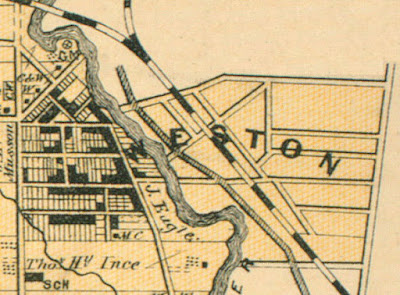 Note that the W of Weston is on the Etobicoke side. They didn't want to put it further west because there it would obstruct the view of the many smaller lots. Unlike maps of York Township which never show anything west of the river, this map of Etobicoke generously shows the rest of Weston on the York side, though not the lots.

Charles Pelham Mulvany, Graeme Mercer Adam, and Christopher Blackett Robinson published a History of Toronto in 1885. Therein we find that "the larger portion of the village [of Weston] is in York Township, that on the west side being in Etobicoke." This is three years after (arguably) all of Weston then being (technically) in York Township. Their account of the 1850 flood is worth noting:

Sixty years ago, on the York side of what is now the Village of Weston, then known as "Farr's Mills", there were only three houses, all occupied by farmers. The village was almost entirely on the Etobicoke side of the river, being mainly situated upon a narrow strip of land, containing between two and three acres, bounded on the west by Wadsworth's mill and tail race, and on the east by the Humber. About fifteen houses, besides stores and other business places, constituted the village. It comprised two stores, a tavern, and blacksmith's, weaver's, cooper's, and saddler's shops. This locality was gradually abandoned, owing to the damage caused by spring freshets. Several buildings were greatly injured from this cause in 1842, and in 1850 the buildings remaining in that part of the village were entirely destroyed.

Not mentioned in any of the above 1850 flood accounts is that the Albion Plank Road bridge was carried away in it, as reported in the 6 April 1850 (page 166) The Globe. The rapid snow/ice melt was said to be the result of continuous heavy rain from "forenoon" on April 3 through the greater part of April 4. How does this compare with the hurricane of September 1878? Just as with the 1850 flooding, the hurricane rain damage was extensive. Cruikshank and Nason mention it in passing (page 8) as the cause of the Wadsworth sawmill destruction.

Weston's origin lies in the industries of Farr's Mills on the flood plain of the Etobicoke side of the Humber River. James Farr's renaming of the community as Weston, uncritically given as early as 1815, is almost certainly much later. Alan Rayburn's 1997 Place Names of Ontario (page 370) suggests 1843. An article by Max Rosenthal entitled Postal Service in the Early Days in York County (BNA Topics, 1965; page 234) has a new post office at "Weston" already in 1842, so that's my choice for when Farr's Mills began to be called Weston. The Globe newspaper began publishing in 1844 and there are a couple of references to Weston in it that year: A mention on October 22 (page 2) clearly places the village in Etobicoke. After the flood-plain community was destroyed in 1850, its trades and businesses intended to relocate to the York side of the river, although to what extent this was accomplished is difficult to ascertain. What is known is that some trades and businesses did eventually come to be established along the Weston Plank Road, just as residential areas grew on both the York and Etobicoke sides of the river. From the 1881 incorporation of Weston until the 1998 amalgamation of the city of York into greater Toronto, the community was effectively split in two by the Humber River, as political borders became manifest. But it was also still held together: by proximity, historical inertia, and especially the post office which continued to treat the Etobicoke side of Weston as "Weston" — right into the 1970s, the era of postal codes when it no longer mattered very much what place designation was used.
Posted by Hans Havermann at 8:38 PM