Back on April 20, I developed a terrible toothache that came to be associated with a swollen lower-right jaw. Over the next five days I consumed more Acetaminophen and Ibuprofen pills than likely I had over several decades. On April 25, my dentist (whom I had not seen since December 2019 because of the pandemic) had a look. 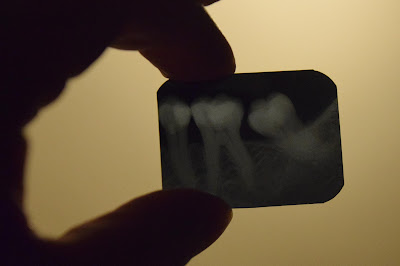 He prescribed a seven-day regimen of Amoxicillin. Within 24 hours the situation improved. He also recommended that I see an endodontist, which I did on May 10. The endodontist gave me three options: do nothing, have a certain dead tooth pulled, or let him do a root canal that involved (at least, pending complications) two three-hour sessions. I don't know that I can last one three-hour session. The last time I had a root canal the doctor left me alone for ten or so minutes and I chose that time to have a panic attack! Unfortunately, that set in motion similar feelings of anxiety, subsequently, every time that I have had my mouth worked on in a dentist's chair.

Mulling over my options, I did nothing over the course of the summer. On July 7, I managed to complicate things by breaking off part of a tooth in the upper-left part of my mouth. As annoying as this was, I did not see my dentist about it. Around August 20, I noted that the area around my dead tooth was getting reinfected. Salt-water rinses were not helping. Fortunately, this time the formation of the abscess was not accompanied by pain and, by August 22, I felt that my own body was dealing with it and that, perhaps, the worst was over. Nevertheless, I was fearful that my immune system was not capable of conquering the bacterial pathogen and I thought it prudent to see if I could acquire an antibiotic.

Constrained somewhat by my unwillingness to travel any distance, I thought that making an appointment with my family doctor right here in Weston was an option. He could write me a prescription and I could get it filled nearby. But my call to his office on August 23 did not go as planned. The receptionist, upon discovering that my last appointment had been way back in November 2012 (I was as surprised as she was: Had it really been that long?) felt that she needed to ask the doctor if he wanted to engage with me. The next day she left a message with their (apparently new) policy: My family doctor was not taking back patients he hasn't seen in over five years due to being overburdened with Covid. Wow, I managed to not only lose my family doctor, but I'm also responsible for my wife losing her family doctor (same doctor, it has probably been five years since she has seen him)!

On August 25, I decided to give my dentist a call. My wife had suggested that they might be able to have a repeat of my April 25 prescription filled at a local dispensary and I should ask about that. They were busy and I had to leave a message. I gave my name and mentioned my previous appointment with the dentist on April 25 and asked about the possibility of filling a repeat of the prescription that I got then, but locally. I forgot to leave my phone number. There was no reply, so the next morning, Friday, I phoned again. The assistant/receptionist who answered tied my request to the previous day's call by noting that her inability to parse my full name had her calling back someone else for the reply. I provided the local Shoppers Drug Mart address and phone number. She said that she still had contact the dentist about all this but if she didn't get back to me that day, she would get back to me on Monday.

I spent the rest of Friday making my potato/carrot/spinach soup complemented with some lentils, roast-beef gravy, and leftover frozen bits from a long-ago spiral ham. I had several bowlfuls and tried to get some late-afternoon shut-eye. When I came to later that evening, I was feeling much better! The swelling in my gums had receded a little and I had the sense that my immune system was going to be able to handle this after all. Perhaps it was some remnant antibiotic in the ham!

Posted by Hans Havermann at 2:30 AM No comments:

4. Tim Hortons (I know. How can something so ubiquitous be so difficult to reach.)

Posted by Hans Havermann at 5:36 PM No comments:

The area of our backyard shown in the above has become a focus of activity of late, first by Bodie wading into the growth sniffing out something-or-other, then by the scurrying of some smallish animals (that I took to be mice) into the crevasses of the railway tie that is there (on the right), as well as the corners of the shed (on the far left) which sported some previously undisclosed openings into its underpinnings.

It wasn't just mice. Unperturbed by my presence, this afternoon I spotted a somewhat larger intruder, lazily munching away at some item in the (left) grassy area: 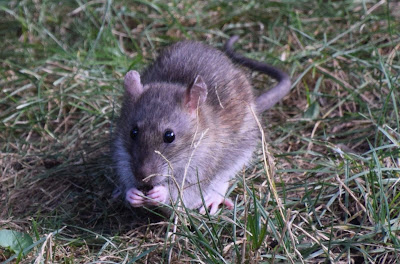 I am wondering now if the opossum that I thought I saw back in June was misidentified.
Posted by Hans Havermann at 7:47 PM No comments:

It has been more than a decade since I last made a Wikipedia edit. Just now I tried again. I changed Michelle Josef's birth year from 1954 to 1953. I have a December 1998 Globe & Mail article describing Josef as "a 45-year-old". And if that isn't substantive enough, I have a 15 March 2012 tweet from Michelle Josef herself saying: "I have been alive 21549 days."

Assuming that Michelle made the tweet on her 59th birthday (i.e., birthday anniversary), this would have her being born on 15 March 1953. How did Michelle arrive at the day count? 59*365 = 21535. Add 15 days for the leap years 1956 to 2012 and we have 21550 days. Why did Michelle calculate one day less? Perhaps she knew that century years (ending in 00) were not leap years and therefore did not count the year 2000 as one. Unfortunately, century years divisible by 400 are exceptions to the century-years rule and 2000 was a leap year. There are of course other possibilities. For example, (2012-1956)/4 = 14, or Michelle tweeted the day before her birthday, or some other scenario.

Update: It appears to have been some other scenario. Michelle tweeted five days before her birthday, so her day count was actually four days too many. Go figure.

Posted by Hans Havermann at 2:00 PM No comments:

One of the drawbacks of Éric Angelini's sum-and-erase is that we are dealing with number strings, not integers. This is because we allow leading zeros. There's an easy and obvious fix: Don't allow leading zeros! Everything else is the same but, if the erasure of all instances of a digit (1-9) that is contained in the sum-of-digits moves one or more zeros to the leading (left) edge then those zeros are erased as well. Now the only number that is allowed to start with zero is zero itself. And 0 by itself disappears because it is the left-most digit of 0 and the sum-of-digits is 0. And although total erasure (the empty string "" in Éric's version) happens here as well, we can define it to be zero so as to keep our sequencing in the integer realm. Conveniently in Mathematica, FromDigits[{}] == FromDigits[{0}] == 0.

0. Start with a base-ten nonnegative integer.
1. Total the number's digits and concatenate this sum to the right of the number.
2. If the first digit in our number is one of the digits in our sum, delete every instance of it.
3. If (after deletion) there now appear leading zeros in our number, delete these as well.
4. If all digits or even all non-zero digits have been deleted, the subsequent term is zero.
5. Otherwise, the subsequent term is the concatenation of the remaining digits.
6. To generate a sequence of terms, iterate. Most starts eventually end up at zero.

In Éric's procedure, I had found (in addition to the fixed-point c0) six cycles. In this integer version, I have [index.  name = c&start-string  (cycle length)  {smallest precursor}]:

Also six cycles (so far), in order of smallest precursor. I have a distance-to-cycle chart. For positive terms it is the number of steps needed to get to zero. Negative terms are for starts that will reach some other cycle. Terms that are 0 are for integers that are part of a cycle.

Posted by Hans Havermann at 6:00 AM No comments: