Delicious Dishes is a film short that was uploaded to the Prelinger Archives in 2003. If you're a watcher of TCM (Turner Classic Movies), you may have — as I recently did — viewed it there. There is precious little real information about the one-reeler on the internet and at least one person (Tony Bensley) was struggling with misinformation. So I decided to have a look.
The first thing that I found was that the film is listed in Graham Webb's 2020 Encyclopedia of American Short Films, 1926-1959: Delicious Dishes: How to Make Them (copyright 24 March 1933, M & M Distributing Co.). The Library of Congress (Copyright Office) has an entry in its 1933 Catalog of Copyright Entries - Part 1 (p. 159) which locates the incorporated company in Asbury Park NJ. Good start! I have a distributor name/place and a very specific date.
I subsequently found Tony Bensley's reply on the YouTube version of the film noting that an Arnold Morris (often incorrectly assigned as the individual in the short) appeared on Late Night with David Letterman on 4 March 1987 and that Arnold mentions (starting @1:12) his father being in the same business as himself. Time to put on my genealogy hat and do some Morris family research.
The April 1930 Asbury Park NJ census has them at 703 Comstock St.:

Arnold's father is Nathan Morris. Nathan's occupation is given as "auctioneer" (of jewelry).
The April 1940 Asbury Park NJ census has them at 1106 Monroe Ave.:

Nathan's occupation is now "kitchen gadgets" (manufacturing).
Nathan K. Morris (24 July 1901 – 29 July 1972) must be the pitchman in the film. Subsequent research found Malcolm Gladwell's 30 October 2000 article about Ron Popeil, The Pitchman, written for The New Yorker. Gladwell suggests that Nathan "partnered with his brother Al ..." That's it! The partnership must have been incorporated as M & M (i.e., Morris & Morris), the distributing company of the film.
There is a 1930 Asbury Park NJ census "Al" at 710 1st Ave.:

Nathan's slightly-older brother's name was actually Abraham. So, was Gladwell wrong about Nathan's brother's name? Initially I thought so, construing a 1930 mistranscription of Abe into Al. However, searching for Nathan Morris in "The Billboard", I soon found this mention of his brother "Al":
Al could be Abe's middle name! I finally clued in after seeing a Billboard short (29 May 1943) on Nat's son, Lester, being in the army, as were "Archie and Rube Morris, sons of Al Morris". Presumably, middle names for Leonard and Edward. I think they were very comfortable with using different names, formally or informally, as the social situation may have demanded. By the way, I've been unable to find Nathan's middle name, but I will point out that there was a 1900 New Jersey Legislature assembly bill (No. 315) entitled "An act to change the name of Morris Kederisky and family to 'Kidders Morris' ...". Kidders was of course Nathan's father. A Geni entry has the surname spelled "Kadaretzky". It is not clear to me how or why "Kidders" morphed into "Kidder" but it seems haphazard. A 1901 New Jersey birth index record has a "Kidder" Morris but the 1905 census has "Keddres". A 1908 accident on a railroad train and the 1910 census has him as "Kidder".
Posted by Hans Havermann at 10:00 AM No comments:

As expected, one of my slower processes has rediscovered (this afternoon) Gabor Levai's 1000027-digit Leyland prime. I thought that it might be a good time to see how far I've come. It seems that I've completed about 49% of the numbers that I wanted to test since I started 132 days ago, so, on average, I'm testing about 220 numbers per day. It means that, at best, I'll be done by February 2023 but a lot depends on my transferring processes from my three slow computers to others as they become available.

I had installed differing operating systems on those machines to see what would happen. I saw no improvement. So I'm thinking now that the slow speed arises from the fact that these three Mac minis were purchased (in order to save money) with only 8 GB RAM, which may be insufficient for the task at hand (it had been adequate for testing 300000-digit numbers). I will now terminate three of the six processes on each machine to see if there is any speed improvement on the remaining three processes. Later this month I will have completed 14 processes on two other machines, which allows me to transfer the 9 terminated processes.

Posted by Hans Havermann at 4:15 PM No comments: 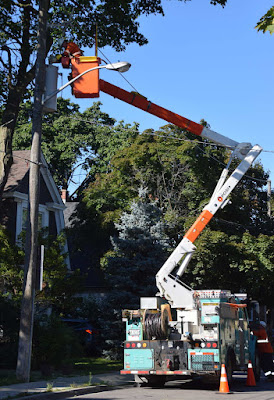 This morning, a 23-minute power interruption allowed a couple of Toronto Hydro employees to do some maintenance work on a close-to-my-home transformer. I have all 18 computers (104 processes currently working on my million-digit Leyland prime search) on battery back-up units but the amount of time here was just long enough to shut down seven of them (39 processes). Another 5 to 10 minutes might have killed them all.

By early afternoon I had saved the output of the interrupted programs and reinitialized their new search ranges. Three of the seven affected computers were the ones that were taking 18.5 hours per candidate in my May 27 reality check, so I installed new (differing) operating systems on those machines, hoping for a speed improvement. I won't know for a couple of days if that will pan out.

Posted by Hans Havermann at 7:17 PM No comments: