I've been looking very hard for the earliest occurrence in print of the number 3816547290 as the solution of a famous divisibility challenge. For an explanation, see OEIS A181736. David Gauld, the author of that sequence, wrote about this number way back in December of 1984 (problem 15 on page 17, here; the following month it appeared in Games magazine, page 2). I recently asked David wherefrom he got that number. He replied that it was in the 1983 book "Les nombres remarquables" by François Le Lionnais. Indeed: 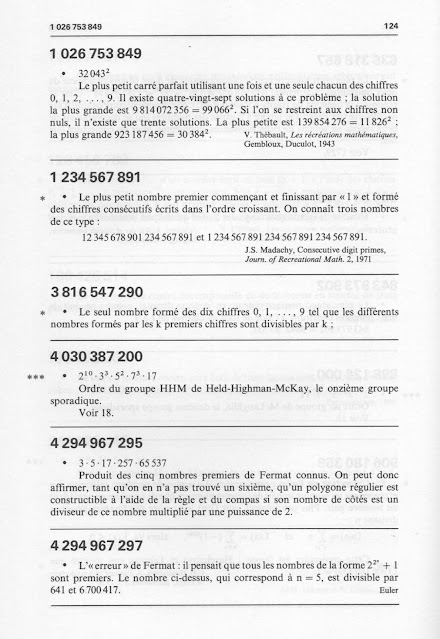 There's more! A Google book search for 3816547290 comes up with a Russian hit, Nauka i zhizn' (Science and life) - page 148, supposedly 1980:
Once I figured out the trailing numbers, this did look like a bona fide mention. The snippet view, alas, showed nothing. And Google's date assignments can't generally be trusted, so I longed for an inside-the-journal look. Playing with it (try searching for 381654), I eventually conjured up this snippet:
Showing a '1980' at the top-right made me hopeful that this is an actual earlier posing of the divisibility curiosity than that of Le Lionnais. If that were so, it would not be unreasonable to suppose that this dissemination was responsible for Le Lionnais (being the well-connected individual that he was) coming to be acquainted with 3816547290.
A variant of the divisibility puzzle that excludes the digit 0 appeared just prior to Le Lionnais in an "Acorn User" competition in November 1982:
The February 1983 answer to the puzzle is significant for noting that the problem appeared in the 'Brainteaser' column of the Sunday Times (in 1982), which is how David Wells credited 381654729 in "The Penguin Dictionary of Curious and Interesting Numbers" (1986). More relevant (to me) is the assertion that it was first posed in Scientific American "five years ago". Of course! That would make it Dr. Matrix (Martin Gardner) in Chautauqua (Mathematical Games, Scientific American, December 1978, page 23):
"Jaime Poniachik of Buenos Aires, who edits an excellent Spanish puzzle magazine titled The Snark, happened to be visiting the Chautauqua Institution at the time of the ASMOF demonstration. When it was his turn to ask a question, he said he had a friend in the U.S. with a curious social security number. Its nine digits include every digit from 1 through 9, and they form a number in which the first two digits (reading from left to right) make a number divisible by 2, the first three digits make a number divisible by 3, the first four digits make a number divisible by 4 and so on until the entire number is divisible by 9. What is the number?"
Gardner's solution (Mathematical Games, Scientific American, January 1979, page 24):
"The social security number is 381-65-4729. Adding 0 at the end gives the unique solution to the same problem with the ten digits from 0 through 9."
So 3816547290 was implicitly noted as of this date and the explicit Russian mention a year or so later is no longer a surprise. In "The Magic Numbers of Dr. Matrix" (1985), Gardner cleans up the ambiguity of his "ten digits" solution by adding "..., and the ten-digit number divisible by 10." There is considerably more in the book but I will quote only a couple of paragraphs:
"Michael R. Leuze worked with a computer to examine solutions to this problem in number systems other than base 10. He found that there are no solutions in any odd base or in base 12. In base 2 there is the trivial solution 1. In base 4 there are two solutions, 123 and 321; in base 6, 14325 and 54321; in base 8, 3254167, 5234761, and 5674321. In base 14, as in base 10, there is a unique solution: 9 12 3 10 5 4 7 6 11 8 1 2 13. Leuze conjectures that there are no solutions in higher bases."
"Leuze sent a thorough analysis of the problem in negative bases. For other generalizations, see 'Progressively Divisible Numbers', by Stewart Metchette, in Journal of Recreational Mathematics, Vol. 15, No. 2 (1982-83), pages 119-22. The problem surfaced again in 'What's In a Number?', Mathematical Gazette, Vol. 67 (December 1983), pages 281-282. The editor added in a footnote that when the problem appeared in London's Sunday Times in 1982, irate readers made the same careless mistake some of my readers did — they complained that the answer was not unique because they had worked on the problem with an eight-digit calculator!"
Finally, Gardner reveals the true author of the puzzle:
"Jaime Poniachik (the person who posed the problem in my column) told me the problem had been invented by his wife, Lea Gorodisky, who worked with him on the Snark."
Posted by Hans Havermann at 9:54 PM No comments:

Canada's Aboriginal Peoples Television Network (APTN) premieres tonight season 2 of Spirit Talker, "a documentary series that will follow Mi’kmaq medium Shawn Leonard as he travels from coast to coast using his psychic abilities to connect the living with the dead and bring hope, healing, and closure to indigenous communities." I've watched all of season 1 so I will certainly watch at least this first episode, not so much for what Shawn says and does (which is all fairly predictable, tired old shtick) but more for enlightening glimpses of behind-the-scenes. CTV News Atlantic (Halifax NS) did this promo piece (Keeping Up with Katie Kelly) introducing the series:

Katie: When you watch the show, you you [unintelligible] ... You know so much. People are shocked by what you say. Is it real? Is it all real?
Shawn: It's absolutely 100% real, yea. This isn't like a scripted show in any way. This is like... They just put me in front of people and let me do my thing.

In spite of being unscripted, Shawn's on-site production team includes some seven other people whose bread and butter depends on how good they can make Shawn look. Shawn himself is not of course an unwitting pawn of the deceased. His art, such as it is, likely goes back to his 1995 marriage to Melissa McClinchy who brought a dabbling in pseudoscience to their relationship (which lasted until 2014). Their paranormal pastime had become a public persona focus for Shawn as he strove* to incorporate his Indigenous ancestry into the act, dropping (for example) his Beaupre surname from his online identity. In 2015, Shawn celebrated an Indigenous wedding to a Bonny Martell but this ended bitterly a mere eighteen months later. Around this time he may have made "Shawn Leonard" his legal identity. The current status of his subsequent relationship to a Michelle Belanger (not the occult author), touted at one point as his fiancée, is unknown to me.

Perhaps a good indicator of Shawn's reach is this photograph ...

... taken from his Facebook header, impressive for the sheer number in his pre-pandemic Spirit Talker "Tribe" online course group and (of course) their gender bias. I have mentioned Shawn once before in my blog, here. Apparently season 3 of Spirit Talker (with an Ontario focus) is already half-way done.

* Shawn is still striving. In the Katie Kelly interview he states: "I'm a very proud Mi'kmaq person." Then, as if to justify the assertion: "I never grew up on reserve. I grew up near to the reserve in Shubenacadie, Nova Scotia." This must be his stock response when folk on the reserves that he visits ask him which reserve he is from.

Posted by Hans Havermann at 3:00 PM No comments:

This image shows the "Larry makes landfall on Newfoundland" advisory location as we moved this morning into the 20th anniversary date of the 9/11 attacks. It is not lost on me that on the attack's 9th anniversary, 11 years ago (also a Saturday), my brother-in-law Larry passed away. The hurricane's landfall is 37 km east-southeast of St. Bernard's.
A CBC news story on the hurricane mentions a "statement" that said "Larry made landfall at 1:30 a.m. NT just west of Long Harbour, N.L., on the Avalon Peninsula." I have no reason to suppose that my National Hurricane Center landfall location is incorrect, so the "just west of Long Harbour" translates to "50 km west of Long Harbour". That's on the other side of Placentia Bay at that latitude, on the Burin Peninsula. So not really a very good description. I'm aware that the official location coordinates might themselves be subject to error bars (especially this far north when much of the eye wall will have dissipated) but that is an entirely different discussion.
CTV's (Canadian Press) version of the event has Larry "arriving near South East Bight around midnight local time, according to the National Hurricane Centre in Miami." South East Bight is very close to the landfall coordinates and when one is looking for a location place-name, it will do. But what about the "midnight local time"? The NHC's summary has "1150 PM AST" (Friday) ... "0350 UTC" (Saturday). Why did the NHC use AST? Likely because that (currently) is Miami time. Technically Miami is in the EDT time zone, but Eastern Daylight Time = Atlantic Standard Time. Coordinated Universal Time is 4 hours ahead of Atlantic Standard Time. But right now, Atlantic Canada is observing Atlantic Daylight Time so landfall would have been at 12:50 AM ADT. Furthermore, Newfoundland Time is an additional half-hour ahead, so 1:20 AM local time. What made the Canadian Press think that AST was local time? It's an easy mistake to make if you have no patience for diligence.
Posted by Hans Havermann at 3:50 AM No comments: 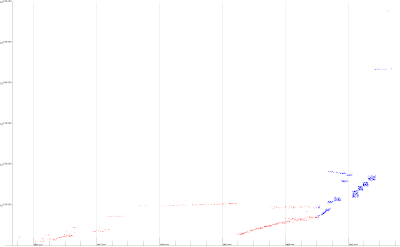 Posted by Hans Havermann at 8:36 AM No comments:

I had been fighting a battle with Google ads for I don't know how long. If it was an animated gif and had an x in the top-right corner, I would smash that x, click "send feedback" and choose "not interested in this ad" from the four options.

When I initially started this, I chose "ad was inappropriate" to more properly indicate my feeling that anything animated was an annoyance — distracting me from reading the page — but the nuance was always that there was something more politically incorrect about the ad and I gave up on the sentiment. Sometimes, after I had flagged a handful of identical such ads on the same page with "not interested", I would finally do a "seen this ad multiple times". And in spite of Google assuring me that it would try to stop showing me these ads, I would in fact see the same stupid ads from the same advertisers again and again.
Early this morning I finally gave up on the experiment. The only noticeable change over all these many months had been that I was seeing more ads for women's apparel. So much for artificial so-called intelligence. I'm now using the Magic Lasso ad-blocker extension in Safari and all I can say is: Why didn't I do this a long time ago?
Posted by Hans Havermann at 2:16 PM No comments: