Yesterday, Futility Closet showcased a nice arithmetical/linguistic limerick that I hadn't previously seen, sourcing it to "Punch, Sept. 29, 1937, via William R. Ransom, One Hundred Mathematical Curiosities, 1953". The Ransom work appears to be typewritten, as evidenced by a Google snippet view from the 1955 book (I think Futility Closet, via Google perhaps, misstated the year):

Already we see some differences from the limerick in the Futility Closet version. Two lines are indented; there are spaces on either side of the equals sign; most importantly, 3/8 actually is 3 over 8. Interest thus whetted, of course we'd like to see the original from Punch:

Oh my! It's written as a sentence, so no capitalizations at the start of the introduced lines; Ransom's 'Maths Master' also is not capitalized; the period after π is a comma; there's a comma after the fraction (to introduce a pause, not necessary in the lines version); the equals sign has no spaces on its sides, but it is extra long (though not as long as Robert Recorde's 1557 original); and the finale: there is no 'why'.
Posted by Hans Havermann at 10:28 AM No comments: 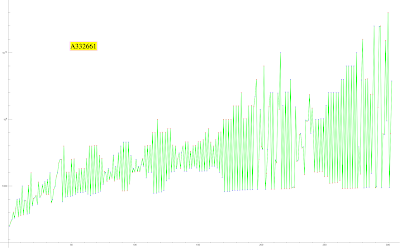 Note that there are a few duplicate products. I count 292 distinct entries, nine of which have duplicates: eight with one duplicate and one with two duplicates.

What's so special about these numbers?