Posted by Hans Havermann at 11:59 PM No comments:

Posted by Hans Havermann at 7:20 AM No comments:

Spotted walking from Clouston Avenue through Denison Park on this morning's dogwalk, a furtive coyote has just left the north end of park and is about to walk up Denison Road West. I managed to get a lot closer to a fox that I saw on Sykes Avenue back on November 27: 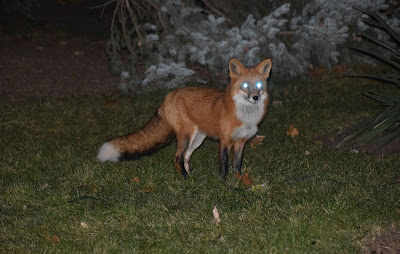 Posted by Hans Havermann at 8:05 AM No comments: 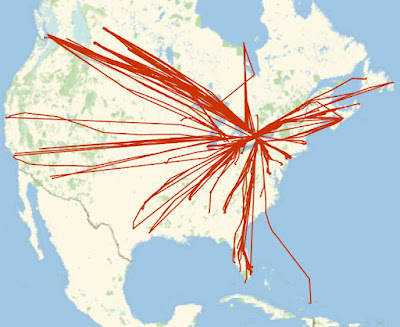 From high above my abode in south Weston, courtesy the latest version of Mathematica, a graphic representation of Canadian and U.S. flight paths yesterday that started or ended at nearby Toronto Pearson International Airport. Zooming in ... 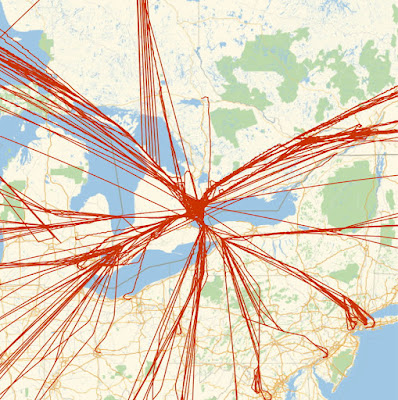 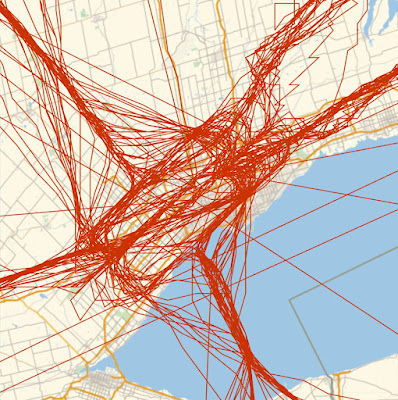 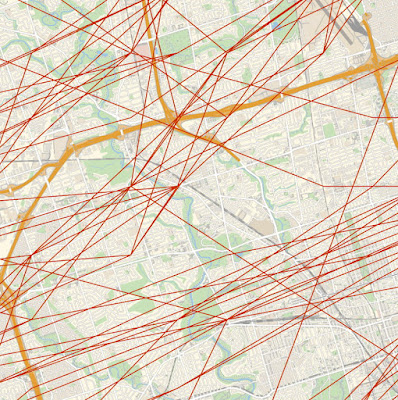 Posted by Hans Havermann at 8:15 PM No comments:

In the above Toronto transit map, Weston Station is clearly marked on the UP Express and GO Line Service routes, heading northwest out of (downtown) Toronto. As one might expect, it is just south of the extended horizontal line connecting Lawrence West (University, line 1) and Lawrence (Yonge, line 1) subway stations.

Roy Murray wrote an article on WestonWeb.ca about Castlepoint's "Weston Park" proposed development right beside Weston Station, pointing us to a YouTube video by Castlepoint Numa on the project. I watched it on December 2nd and noticed that the location of Weston Station had been moved southeast so as to appear much closer to Eglinton Ave. W. in Mount Dennis. So I decided to make a YouTube comment pointing that out: "There's a transit map at 0:50 to 0:55 where Weston Station pops up at an incorrect location. It's actually a good deal further northwest. Presumably the disingenuous placement is meant to convince the target of this propaganda piece of the station's proximity to the Eglinton Crosstown corridor."

I noticed today that my comment had been removed and comments turned off.
Posted by Hans Havermann at 2:33 PM 2 comments: