A Leyland number is x^y+y^x, technically x >= y > 1 except that (x,y) = (2,1) has lately been admitted. Ordered by size, every Leyland number has associated with it an index number. Leyland primes are Leyland numbers that are prime, proven or probable. Most of the known Leyland primes can also be indexed — but not all of them! The difficulty lies in the manner in which Leyland primes have historically been discovered: restricting y to small values while allowing x to be very large. This method divorces finds from their Leyland number indices (i.e., their size), with the possibility of unchecked primes existing between two known examples. Of the currently 1092 known Leyland primes, I believe that the smallest 954 (or slighly more) are indexable.

There's a Numberphile video on Leyland numbers and Leyland primes. In it is mentioned the currently largest known Leyland prime: Sergey Batalov's (x,y) = (328574,15). What might be this 386434-digit prime's index? Step one is to figure out the number's Leyland index. Using a Mathematica program to count, I believe it to be Leyland #3808683611. Step two is to fit the Leyland number indices of the 954 indexable primes to a curve: 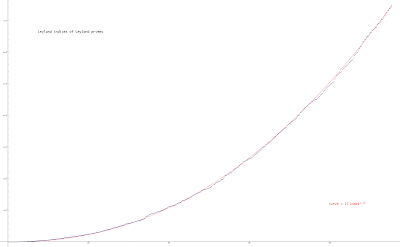 The suggestion here is 17*index^2.23 as a decent fit. This equation is not meant to be exact: a database of further-along primes might necessitate adjusting the multiplier and exponent somewhat, but for our purposes it is good enough. What Leyland prime index will generate a Leyland number index of ~3808000000? The number 5553 comes close. So, I expect the currently largest known Leyland prime to be roughly #5550 of all Leyland primes. That leaves thousands of smaller Leyland primes still to be discovered!
Posted by Hans Havermann at 5:05 PM No comments: 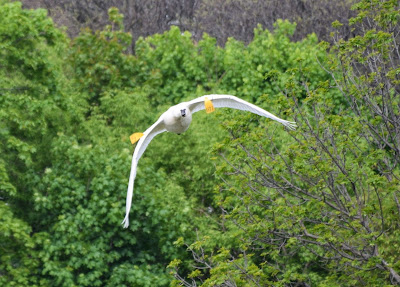 Year after year, I see here a lot of the same bird species (and, I rather suspect, the same individuals where those species are poorly represented). I first saw this trumpeter swan in the river on May 7, and again the following day. I thought it had moved on, but there it was yesterday — flying a couple of circles before heading upriver. I know there are trumpeters on the lake (Ontario) but this is the first one I've seen in this locale. Ontario trumpeters sport yellow wing-tags for easy identification.
Posted by Hans Havermann at 2:55 PM No comments: