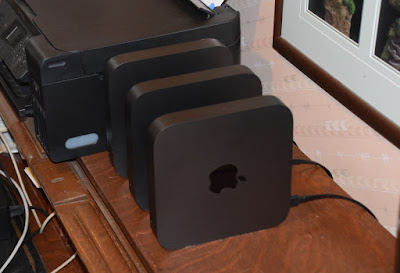 A month ago I acquired three Mac minis to add to my arsenal of large-prime-searching computers. I've never had a Mac mini before so I wasn't at all sure what I might be getting into. In particular, their 3.2 GHz clock speed was less than the 3.4 GHz on my six-year-old iMac and the 3.5 GHz on my five-year-old Mac Pro.

I needn't have worried. My Leyland-prime search is organized into bundles of 88670 Leyland numbers per core. At the current ~101500-digit number size, it takes my Mac Pro about 43 days to cover that space. My old iMac is actually a couple of days faster — even though (as my main machine) I'm running a handful of other things on it at any given time (which slows it down a bit). I am now near the end of a run on two of the Mac minis which will (tomorrow) have covered the space in under 29 days!
Posted by Hans Havermann at 5:55 PM No comments:

I rewrote my program for generating self-stuffables and managed 95 terms (< 10^17) by December 12, on which day I submitted my observation about the 103008000000 family. One week later — still waiting for that comment to be approved — I decided to advertise it on the Sequence Fanatics Discussion list. Although I had noted that it was an infinite family, John Mason felt it important to point out that he had extended (but not yet submitted) his b-file and had found 1031111008000000 and 10311111008000000. In order to give John a heads-up, I emailed him privately and told him that I was four days away from finishing my 18-digit terms (<10^18), adding at least three dozen terms (which I had by then calculated) to the 95 terms we had both reached. I asked John if he was working on the 18-digit terms as well. He replied that he wasn't. If he had been, I would have offered to wait until he was done so that we might co-author the extended b-file together.

Two days later (December 21), John posted to the Sequence Fanatics Discussion list that he had calculated the 18-digit terms and had submitted his new 134-term b-file. Interestingly, he left my count at 41. Ouch! Mason had the audacity to complain that he was looking for efficiencies in his program as it had taken him all of eight hours to run. Mine was taking eleven days! To add insult to injury, on December 22 the iMac on which my program was running suffered a kernel panic and — one day short — I lost the completion of it.