The FreshCo that (two months ago) I anticipated opening, opened today. I was there just after 9 AM checking it out. I had washed my hair and changed my hole-riddled T-shirt so that folk wouldn't mistake me as a harbinger of a zombie apocalypse. It was the first time in over seventeen months that I have been inside a grocery outlet! I picked up a couple of 2L milks, a couple of 750G yogurts, one head of lettuce, a chunk of beef, and a few smaller items. These were distributed in two bags that I had brought to the store. The ten-minute walk home was somewhat tiring, my back apparently no longer suited to such a task. One sour note (noticed after I got home) was that the box of Milk-Bones I purchased only because it was shelf-tagged at $1.25 (a very good price) showed up as costing $2.49. The $5-off opening special (on orders over $35) made up for that annoyance.
Posted by Hans Havermann at 11:11 PM No comments:

The Huron and Ontario ship canal

After the Frederick Moffat house aside in my last blog article, I wondered about other early settlers in my neighbourhood, in particular those on my street: Sykes Avenue. Additionally, I wondered about the street name's origin. A possibility soon emerged: William Sykes (1815-1872) who in his later years became resident engineer of the Huron and Ontario Ship Canal Company in Toronto. An 1869 prospectus of that venture is made available by Kingston's Queen's University, here. A more-than-interesting aspect of the proposed canal was its debouchure near Toronto: 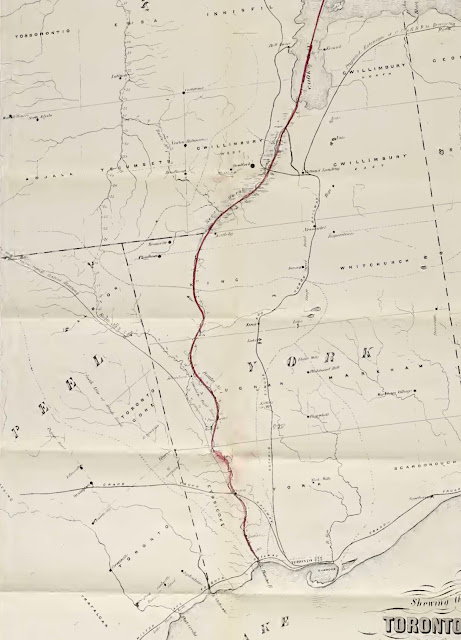 "The Southern division will commence in the Humber Bay, at a point about 25 chains west of the mouth of the Humber River, where it is proposed to make three lift locks in the solid ground, elevating the canal 45 feet and carrying it, by means of a stone aqueduct, over the Lake Shore Road, Great Western Railway and side road. From the Northern extremity of this aqueduct, the canal will be continued, through the solid ground, to the village of Lambton, a distance of three miles, where it will join the river and receive its water supply. Following the valley of the Humber River for about three miles farther, to Weston, it will there intersect the Grand Trunk Railway, which is carried over the valley of the Humber by a viaduct about 60 feet above the water level. There the canal will be brought, by the necessary excavation in the bed of the stream, underneath the Railway, at a level to afford 100 feet clear headway for the passage of masts of vessels; its elevation to the natural level being effected, after passing beneath the viaduct, by three lift locks."

It is difficult to imagine the plan's impact on Weston had it ever come to pass. How might history have been changed, for example, in light of the flooding caused by the hurricanes of 1878 and 1954? This section of the canal's meander ends up in Lake Simcoe, called "Lac Taronto" by early French map-makers who appropriated an Aboriginal word referring to the area between the eastern part of Orillia and Atherley. The proposed canal's waterway route from Toronto to Lake Simcoe (shown in red) mirrors in part a supposed Toronto Carrying Place trail.

There exists a perceptual mechanism known as "figure—ground": We focus on the former to the exclusion of the latter. I believe now that the Carrying Place trail is such a figure, the ground (ironically) being its nearby waterways. This figure has been honed by far too many occasions of uncritical thinking, relying largely on the portion of the trail (from Bloor Street to Weston) with which we are most familiar. I gave a hint of the problem that this entails in my 2017 article on Weston's origin "across the river":

"There's another plaque at the northwest corner of Little Avenue and Weston Road ... detailing — in a map — the 'Toronto' Carrying Place, a portage trail running from the Humber River at Bloor Street to the Holland River, a considerable journey. You may be forgiven if you think that the dashed line segments represents an actual path, but in fact we know very little about the journey. The trail is just a supposed connection between the start and end points, ignoring the many places along the way where a canoe might sensibly be set in water."

In fact, the trail isn't the figure; it's the ground. The waterway route is the real figure! The supposed "trail" is really just a bunch of portage elements, of which the stretch from Bloor Street to Weston misleads one into thinking that this is all about walking, not canoeing; that this is all about a land route starting in Toronto, not a waterway route ending in Taronto.

Update: I have discovered that the Huron and Ontario ship canal is a decade-later rehashing of the Georgian Bay canal proposed by R.B. Mason and Kivas Tully in 1858. The chart/map "shewing the several proposed routes of the Toronto & Georgian Bay ship canal between the city of Toronto and Lake Huron" is from their survey. Embarrassingly, what I had taken to be the figure of Indigenous roads in the Huron & Ontario ship canal folded-map segment (which lacked the legend) turned out (by reference to the Toronto & Georgian Bay ship canal map) to be the ground (ridges) of watersheds. It is actually an interesting correspondence: The ridge of a watershed is high terrain that encounters no flowing water. This is ideal for a no-maintenance transportation corridor! 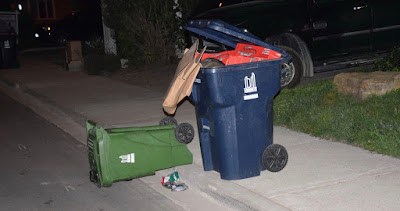 My pre-dawn walk with Bodie this morning was to go (on the sidewalk, left to right in the photo) past these two bins on the Sykes-side of the once Frederick Moffat house. [The linked obituary suggests that his Denison (not Dennison) Rd. W. residence was "Corralyn" which (instead) appears to have been his cottage on Peninsula Lake.] The sloping-concrete section in front of the driveway is noteworthy to me because back on February twenty-second I apparently slipped here on the ice. As I regained consciousness that morning, a sore spot on the back of my head was firmly planted into the sidewalk. Bodie, dragging his leash, was several metres ahead so I hadn't been out long. It did not appear that he was the least bit concerned, nor that he was about to help get this Timmy out of the unwell.

The overturned green bin is a known sign of raccoon mischief. As I approached, the lid on the mostly-closed blue recycling bin opened up. Slightly startled, I decided to traverse the terrain on the street side of the bins, instead of the sidewalk. I snapped the photo of the still-dark crime scene after I had gone past, hoping to illuminate the perpetrator.

Posted by Hans Havermann at 5:12 PM No comments: