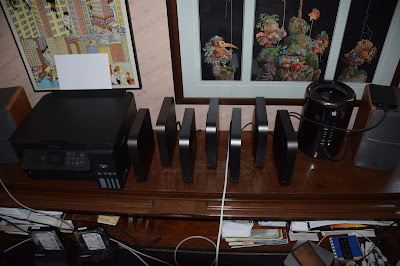 An hour before midnight on Tuesday I found my 300th Leyland prime. It was only this past January when I had found my 200th. Compare that to August 2016 when I found my 100th! The reason for the apparent speedup is that I finished my almost-two-year search of ~100000-digit Leyland numbers in April and started advancing again the Leyland prime index — which had been languishing at #1179 on a 56230-digit prime. In short, since April I have been working on ~60000-digit Leyland numbers and they take much less time to probe (for probable primality) than the 100000-digit variety.

The farm currently consists of six of the pictured 6-core Mac minis (the seventh is working on another problem). For the farm's first coordinated (don't read too much into that word — I'm merely starting the runs at the same time) task, each of the 36 cores will be assigned a bundle of 173430 Leyland numbers to check. The Mac minis are reasonably fast — comparable to my 4.2 GHz 2017 iMac even though the minis are rated at only 3.2 GHz (there's built-in speedup potential if the cores are sufficiently cool). The minis are about 40% faster than my late-2013 6-core Mac Pro which is rated at 3.5 GHz.

While the now-seven Mac minis are a significant upgrade from what I started with 8 months ago, I am thinking that there is room for another two in the array! It'll be a bit of a juggle: I don't want them to come equipped with the next Mac OS (Catalina, which is slated for "the fall") because my running apps are 32-bit and OS 10.15 will only handle 64-bit apps. On the other hand, my savings are drained so it's unlikely that I will be able to make the purchase before the OS release.
Posted by Hans Havermann at 9:20 AM