Allan Reed and Frances Montgomery were married in 1937 in a Goderich Presbyterian church. Their third child, Eleanor, was born 8 January 1944 in nearby Dungannon, having been preceded by her siblings James and Jewel. A good Christian upbringing was no doubt an integral part of all three children's lives. Nevertheless, Eleanor found herself pregnant at age 18 and I do not know who the father was or that she had married. I do know that she was Mrs. Pat Moorehead a decade later when Canadian Queen of the Fiddle was released. The dates and circumstances of that relationship are also unknown to me. Eleanor's daughter, Catherine, was soon to be part of Eleanor's circa-1973 marriage to Graham Townsend, musician extraordinaire, and the 1975 birth of a step-brother, Graham (Gray) Jr. 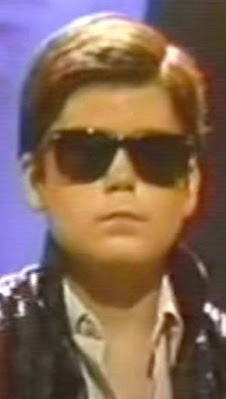 The young Gray picture (above) is taken from a YouTube video where he is wearing dark glasses. It is well known that Graham Sr. was visually impaired from birth. Not well known is the fact that Graham's father, Fred Townsend, also struggled with poor eyesight in his youth and, by the time he reached his twenties, became convinced that he was going blind. In the 1901 U.K. census, Fred's mother, Alice Townsend (1878-1962), as well as Alice's mother, Dinah, are both described as "partially blind". Dinah's husband, William Townsend (1833-1921) is described as being "blind since 1864".
In 1984, Catherine had her first child, making Eleanor a grandmother. In 1991, Eleanor's mother, Frances, died at the age of 76. A year or so later, the Townsends moved to Barrie. In 1993, Catherine had a second child, Isabella, by a second-marriage to a Mr. Monti, who is otherwise unknown to me.