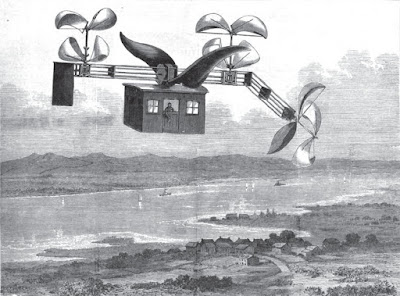 Earlier today's Futility Closet titled Ahead of Schedule (since deleted) was to me more than a little disappointing. It highlights author Jack Finney's 1973 suggestion that a flying machine invented by W. J. Lewis circa 1876 might actually have flown across the skies of New York that year. Futility Closet's Greg Ross noted that when Finney included the speculation in his 1983 book, Forgotten News, he still "hadn’t received a definite answer".

So here's a definite answer: No. A flying machine invented by W. J. Lewis never flew any American skies. Finney's New York Times piece was of course mischievously disingenuous. He failed to point out that the 30 December 1876 Frank Leslie's Illustrated Newspaper (wherein Lewis's new flying machine is featured) specifically stated that what flew during "a formal test" was a small model. As the 22 September 1877 Scientific American Supplement (also featuring the machine) pointed out: "It is an easy matter to make a small flying machine shoot up a short distance into the air by means of a spring. But to make a large machine, with a steam engine, lift itself and sustain itself in the air is a problem not yet solved."

The picture of the flying contraption was reprinted yet again in a T. C. Hepworth story called Voyages in Cloudland (Frank Leslie's Popular Monthly, September 1883) wherein the Lewis machine's "travel through the air" was still nothing more than a proposal. The 27 May 1892 Velasco (Texas) Daily Times: "Dr. W. J. Lewis of San Antonio is nearing the completion of his aerial bird. He will place his bird on exhibition when finished and proved to be a success. Its [sic] only a model and says he is sure of revolutionizing navigation."

A "San Antonio history" site has a reference for 26 September 1894: "Dr. W. J. Lewis returned to San Antonio from St. Louis where he had purchased aluminum for his new invention — a flying machine with stationary wings to be powered by a machine-drive propeller." And that led me to this 29 September 1894 (preceded by "14 years ago today") text-file entry: "Dr. W. J. Lewis, of San Antonio, who is working on a flying machine, is in St. Louis. He has been studying aeronautics for 25 years. A machine was built 12 or 15 years ago, but the friction and consequent amount of power needed were too great. Dr. Lewis has been experimenting ever since trying to reduce the friction to a minimum. He believes success is not far off. Dr. Lewis' machine is constructed of bamboo covered with silk."

The 1 June 1898 Times-Picayune (from New Orleans, Louisiana) has an article that asks: "Has Dr. W. J. Lewis, of California, who is now visiting this city, discovered the principle of the flying machine?" A 30 November 1900 Macon (Missouri) Democrat newspaper article starts: "Dr. W. J. Lewis of St. Louis has invented a flying machine that flies. It is built on the order of a bird. It gives good satisfaction and by 1903 Dr. Lewis says he will have one completed — large enough to carry ..." I'll note that the 1876-1883 references all had the not-yet-doctored Mr. Lewis "of New York".

Back to Finney's 1973 speculative fiction: "So what happened after W. J. sent his machine twisting and torquing across Manhattan's skies in 1876? People just weren't a bit surprised; they'd been expecting it. Probably wondering why it had taken so long. And then, what with one thing and another, they got busy, and it just slipped the nineteenth century's mind." Give me a break!
Posted by Hans Havermann at 5:25 PM