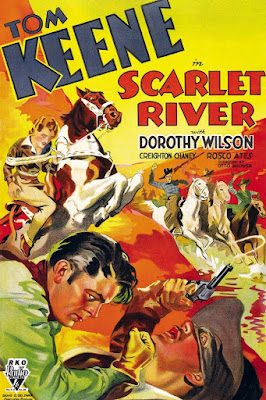 The 1933 "Scarlet River" was playing on Turner Classic Movies between 2 and 3 AM yesterday morning and (for no particular reason) I watched bits of it. What most caught my attention was a sequence where a string-and-stick object was attached to someone's apparel and the unlucky person couldn't figure out how to detach the it. (Some years ago I wrote a handful of puzzles-in-the-movies blogs: I, II, III, IV, V). The Scarlet River puzzle is of course "Releasing the stick" featured in Henry Dudeney's posthumous 1932 "Puzzles and Curious Problems" (#349 therein; it became #530 in the Martin-Gardner-curated 1967 "536 Puzzles & Curious Problems"). It seems reasonable to suppose that the inclusion of the puzzle in the 1933 movie was predicated on the aftereffects of someone having seen it in the 1932 book. 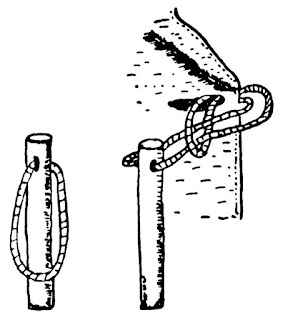 Dudeney wrote: "Here is a puzzle that will often cause a good deal of bewilderment amongst your friends, though it is not so generally known as it deserves to be. I think it was invented by Sam Loyd, the American chess and puzzle genius. At any rate, it was he who first showed it to us more than a quarter of a century ago." I'm not sure when Dudeney wrote that (he died in 1931) but let's agree that the showing was pre-1906.

When Jerry Slocum and Jack Botermans published their "New Book of Puzzles" in 1992, they featured the 1959 "Magic Holetite Pencil" and wrote about its origin:

The famous American puzzle inventor Sam Loyd was asked by the head of the New York Life Insurance Co., John McCall, to make an advertising puzzle that their salesmen could take with them, and that would make their clients remember its message. Loyd went home and returned to McCall the next day with a small stick attached to a loop of green cord. The stick looked like a policeman's billy club and it was slightly longer than the loop. McCall failed to be duly impressed. "What's the purpose of it?" he asked Loyd. Whereupon Loyd took McCall by his lapels, stuck the cord through the buttonhole and the stick in turn through the loop. "Alright," he said, "let's make a bet. If within half an hour, you've gotten the stick out, without cutting the cord, I'll give you one dollar. If not, you owe me one." McCall pulled and pushed and, in short, spent 30 minutes of his valuable time trying in vain to remove the stick. After his time was up, Loyd accepted his dollar with the words: "In return for a $10,000 life insurance policy from NYLI, I'll take the thing right off of you!" Now McCall was impressed. "By this our clients will surely remember our salesmen!" The Buttonhole Puzzle became one of Loyd's most successful puzzles and it created the phrase "to buttonhole" someone.

[Taken from the web; I don't have the book.]

There's a couple of details one gets from this that are at odds with how Alain Campbell White described the events in 1913 (Sam Loyd and his Chess Problems, page 103):

It was Loyd's theory that the simpler a puzzle could be made to appear the more people would try it. It was the same theory that led to his making problems like No. 98, which have become so popular. A good instance is the one which he told about for the Delineator, and which he called John A. McCall's puzzle, after the late President of the New York Life Insurance Co.

"Once John A. McCall sent for me and suggested that I invent something in the puzzle line for his agents to use that would pleasantly keep their mission in folks' minds. The next day I returned with this." Here Loyd drew forth a small stick, some six inches long, cut to represent a toy policeman's billy. It was hung on a green string loop, the loop being almost but not quite as long as the stick. "Well, McCall dangled it on his finger: 'H'm,' said he, 'very neat, but hardly striking, I should say. How do you propose to use it?' I grasped the lapel of his coat, I slipped the string through the buttonhole, and then I pushed the stick so — and then I said, 'Mr. McCall, I'll bet you a hundred dollars to one that you can't get that off in half an hour without cutting the string. McCall put up the money, and so did I, and then he spent thirty minutes of his valuable time tugging at that toy. At the end I pocketed his dollar and remarked, 'Mr. McCall, I'll take that off for you if you'll agree to take out a ten-thousand-dollar policy on your life!' He laughed. 'Great,' he said, 'This'll make folks remember our agents!' That was one of my most successful puzzles."

Slocum and Boterman's addition of the "to buttonhole" origin is pure folk etymology. Sam Loyd died in April 1911. The Delineator mention by White refers perhaps to Walter Prichard Eaton's "Sam Loyd and his Ten Thousand Brain-Teasers" in the April 1911 issue of that magazine (which I wish I had a copy of). At any rate John A. McCall died in early 1906, so anything Loyd said about the origin of the "John A. McCall's puzzle" was thereafter not likely to be challenged. And knowing Loyd's penchant for making self-aggrandizing, bogus claims, I suspect that it was just that!
Posted by Hans Havermann at 12:35 AM