One thing leads to another. Once I got my library card so that I might access (online) the original newspaper articles for my Weston bones article, I used the tool to go over some family genealogy. I had previously relied on a research associate's access to archived Toronto newspapers for such information but now I was in the driver's seat! 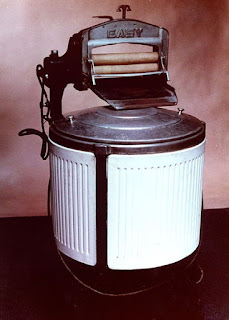 This photo was stolen from here. My wife's grandfather, Frank Powers, had in his obituary that he was a "salesman for the Easy Washing Co. Ltd. for some years". He appears to have had a variety of jobs in his life, including (in the early 1910s) working for a printer and a jeweler. At any rate, I quickly learned that the clothes wringer at the top of the machine was called a mangle. And it would be natural to suppose that this is where the verb to mangle originated. Actually, it was the other way around.
Posted by Hans Havermann at 11:22 AM