Mysterious lights in St. John's Cemetery on the Humber 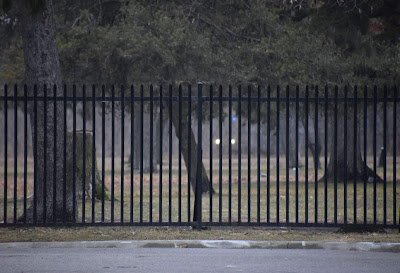 Photo taken from the middle of Denison Park, looking south, the evening darkness fast approaching, two bright lights appear in St. John's Cemetery on the Humber and, after a short while, go out. I suppose one hundred years ago when the park and surrounding area were still all fields, one might have thought such an occurrence — especially at night — to be mysterious, especially if the lights reappeared in the same location at irregular intervals — but never on for very long.

Of course I've seen this phenomenon innumerable times over the last forty years, as have many of the local residents. I've never given it much thought because the explanation was always a tad obvious, all the more so if one was in the cemetery when the lights came on. I was reminded of it only because I came across an article by Clark Kim in the 30 October 2013 edition of the York Guardian:

"There was a story that Denison Cemetery was haunted," said [Cherri] Hurst [of the Weston Historical Society]. It was also known as St. John’s Cemetery on the Humber where members of the Denison family are buried.

Lights would mysteriously be seen in the cemetery at night. It turned out those lights were turned on and off by whiskey runners trying to hide their stashes of alcohol.

"Weston was a dry town for a long time. It was a small town. You couldn’t get away with stuff," she said.

Note the emphasis on the lights being turned on and off. Behind the south end of the cemetery is an almost 200-metre stretch of much lower ground before it rises again to where West Park Healthcare Centre has its presence. I don't know what the road layout was one hundred years ago, but today there is a curved West Park Receiving road off Emmett Ave. that presents a gated "employee entrance" a little along. Beyond the gate, one arrives at a 50-metre stretch of straight road that then abruptly turns right. That straight stretch is what allows the lights to "turn on" and the sharp right, to "turn off". In the following Google map, a yellow arrow extends the straight stretch of road over the low ground, through the cemetery, through Denison Park, stopping at the park's north end (at Lippincott St. W.): 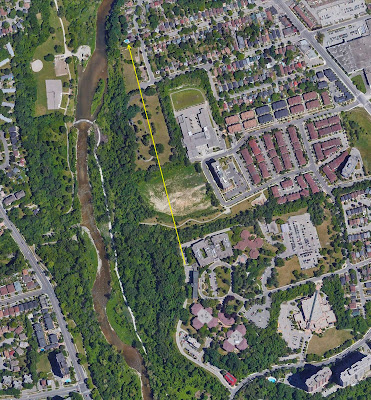 Posted by Hans Havermann at 7:21 PM