I got my ancestry-by-populations chart from 23andMe today: 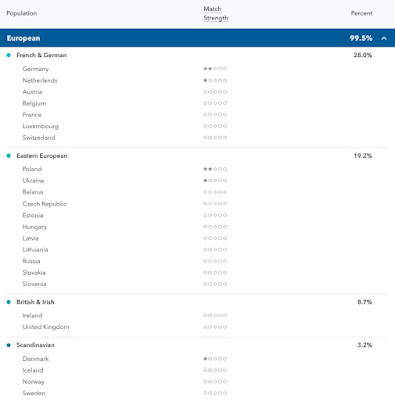 No real surprises. My father's family is the German component. The Netherlands and Denmark matches just serve to regionalize which part of Germany (northwest) that family lived. Poland is there, of course, because that was my mother's mother's place of birth. We had always thought of my mother's father as Russian and the match for Ukraine is a nominal step in that direction, as one mustn't take these countries literally.

Somewhat more surprising is the 8.7% British and Irish component. It doesn't mean, I'm sure, that I have an ancestor that hails therefrom. Rather, some British and Irish populations share a common ancestry with me.
Posted by Hans Havermann at 12:00 PM