I wrote about our local "reverend" Patrick White of the Chaplain's Office here and here. When I was doing all that research on him I somehow missed the February 2017 fundraiser set up by York St. Peter's, an evangelistic organization based in Woodbridge ON. White's friend, Oliver, is noted as being in "serious condition" after he "was overcome with smoke and suffered 3rd degree burns" fighting a stove fire in White's apartment — which Oliver had been assigned to "watch" while White was out of town. Oliver, I guess, was augmenting his watching with a little cooking.

Another casualty of the fire was Patrick White's parakeet, Joey, who came through the ordeal with a bit of smoke inhalation. Joey is mentioned in a photo on the Chaplain's Office website: 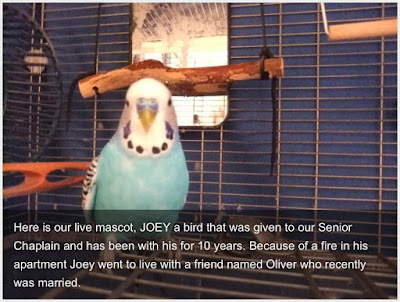 Wait a second! Your friend Oliver was seriously hurt in a fire in your apartment and all you can say is that he was recently married ?!
Posted by Hans Havermann at 12:48 PM