A deep walk in base-three pi

In my previous post I set up a graphical depiction of the ternary digits of π by "walking" them from the origin to (950,2678) in 25 million steps. Here is an alternate view — in orange — of the same walk (click on the picture to better see the detail): 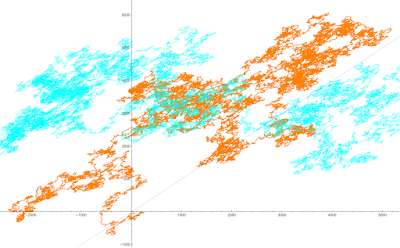 This is a compressed version of my previous graph as only one of every one thousand points is shown and connected. I have added an x=y line to indicate where along the walk the accumulated number of ones and twos might be equal. (950,2678) is shown as a black dot. Starting at that point — in cyan — I have continued the walk (a bit of the left and a lot of the right of it has been cropped). The full walk to 8 billion looks like this: 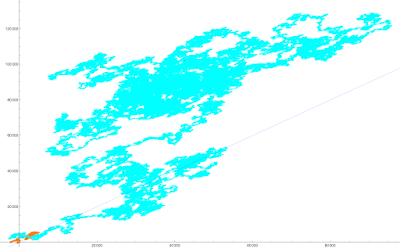 A hint of orange near the origin betrays the change in scale of the continuation. After step 8 billion we have reached (42488,102078), also marked by a black dot. Which is to say that we have a digit deficit at this point of 102078 zeros and 59590 twos! I counted 96619 times that the number of ones and twos were exactly equal. And we are left with 0, 15, and 18 initial ternary-π digits as the only known instances where the number of all three digits are exactly equal.