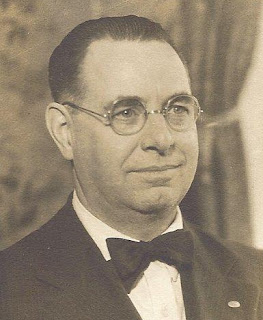 Emmo W. was the nom de plume (by way of M.O.W.) of a Melvin Oscar Wellman. Melvin was born 18 January 1881 in the township of Danby, Michigan (roughly west-northwest of Lansing). In 1910 we find him in Charlotte with a wife and two sons; and from 1920 on, in Lansing.

I am indebted to Melvin's grandson, William W. Wellman, for providing me with additional information. He writes:

I spent a lot of time fishing with my grandfather, into my mid-teens. Melvin was an avid fisherman who made split bamboo fly rods, for himself and both of his sons. Every summer in the early 1900s, he took his family by rail to Petoskey, Michigan to spend weekends fishing local small lakes accessible by train. During the week, he barbered in a popular barber shop, McCarthy's, where he may have cut Ernest Hemmingway's hair.

Even though my grandfather only had an 8th grade formal education, he was the smartest person I ever knew. He was an avid reader of English, history, and puzzle books.

Melvin was also a regular contributor in the 1940s to The Enigma (a publication of the U.S. National Puzzlers' League) and is credited with introducing therein, in March 1945, the spoonergram. In the April 1948 issue, he gave us this enigma: 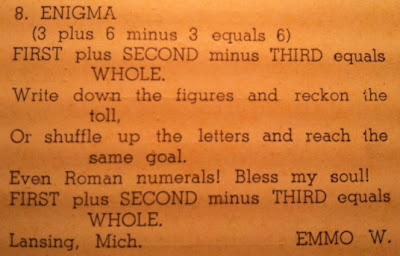 And here is how the mysterious Dr. Matrix (Martin Gardner narrating) paraphrased it in Scientific American in January 1960 (page 154):

"11 plus 2 minus 1 is 12. Let me show you how this works out with letters." He moved to the blackboard and chalked on it the word ELEVEN. He added TWO to make ELEVEN-TWO, then he erased the letters of ONE, leaving ELEVTW. "Rearrange those six letters," he said, "and they spell TWELVE."

The anagram ELEVEN + TWO = TWELVE + ONE is well known in word-play circles, though generally stated without attribution. Now you know from whence it came.

Here is a photo of Melvin and his wife Lucy, later in life. Melvin died 7 October 1955.
Posted by Hans Havermann at 9:09 PM