This was the title of Valentin Albillo's 1997 unsolved position #91. In 2003, Vincent Lejeune had ChessMaster 9000 declare e4 as a mate-in-11. I wanted to see what a modern, off-the-shelf chess engine would do with this position. 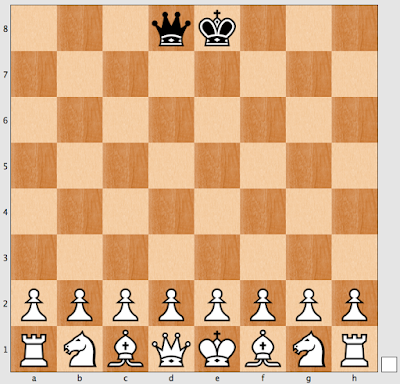 The program I used was HIARCS Chess Explorer. The analysis engine is Deep HIARCS 14 WCSC. Because I am running several number-crunching applications concurrently, I did not expect to see full performance on my late-2012 iMac. Nevertheless, in its default hash-table-size setting, it managed a mate-in-11 for e4 in a few hours.

I restarted the 32-bit chess engine with an increased hash-table-size of 2 GB (the maximum possible). Unexpectedly, it did not discover the e4 mate as quickly, but (as compensation, perhaps) noted that Nc3 was mate-in-11 as well. I have kept the evaluation running to see what the other eighteen lines might produce. Eventually, they are mate-in-12 for twelve (d4, e3, h4, a4, b3, c3, Nh3, Nf3, h3, d3, b4, c4) of them, mate-in-13 for five (a3, Na3, g4, g3, f4), and mate-in-14 for f3. HIARCS is not a mate solver, so these numbers should be seen as mate-in-at-most with a slight improvement possible, though not entirely expected.
Posted by Hans Havermann at 1:11 PM