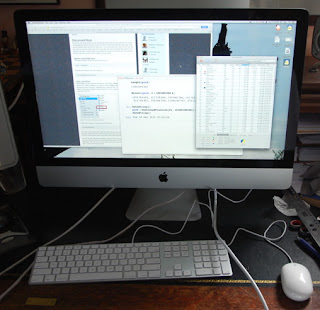 Yesterday, the replacement for my nine-year-old dual 2-GHz Power-PC G5 arrived and — as suggested in the final entry of my old blog — in the wee hours of this morning I purchased and subsequently downloaded the home edition of Mathematica 9.

The 27" iMac (2012) had been maxed out with what I could add at the Apple store, with the exception of 32 GB RAM which I had ordered from a third party and installed myself.

For the most part the setup went smoothly. I had to figure out how to do my web-sharing, resolve a will-not-fetch-mail issue, and resign myself to not using Java for now. I booted up Mathematica and asked for $MaxNumber. It suggested: 8.768126706828697*10^2711437152599256. So I knew I could do a lot better than the 180 million terms of the pi continued-fraction generated back in 2002. Requesting one billion terms, the calculation required just over one hour!
Posted by Hans Havermann at 8:12 PM